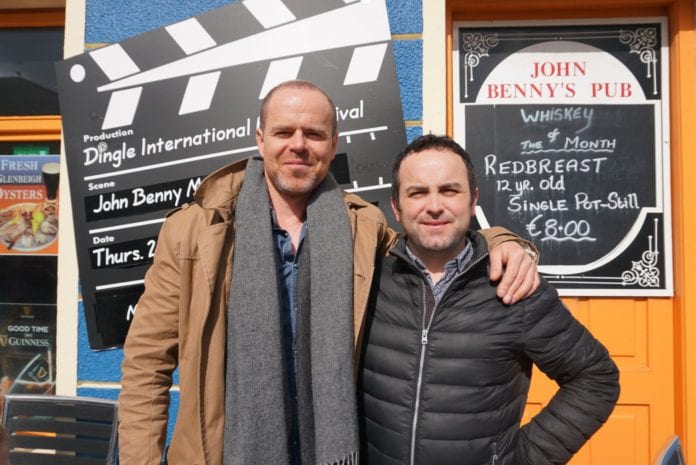 While the weather forecast for the evening doesn’t look great, it gives us the opportunity to laze around and finish off the last of those easter eggs guilt-free while indulging in some late night television. I couldn’t ask for a better way to spend the evening if I’m honest but the icing on the cake comes as Tristan Heanue’s ‘A Break in the Clouds’ will have it’s TV premiere tonight, the 2nd of April on RTE2 at 11.45pm as part of Shortscreen.

Shortscreen showcases the very best of Irish Short Films every Monday night on RTE2 with Heanue’s film being selected for this weeks episode.

‘A Break in the Clouds’ is the story of a young couple who struggle to adjust to life after the birth of their first child. The film was written and directed by Tristan Heanue starring; Tristan Heanue, Gemma-Leah Devereux, Marie Ruane and Linda Breathnach.  Tristan Heanue and Paddy Slattery co-produced the film.

Heanue is currently basking in delight following his recent win at the Físín Pitching Competition which took place at the International Dingle Film Festival last weekend on the 25th March.

The Físín Pitching Competition is an annual competition which has taken place at the Dingle International Film Festival since 2011. This competition is aimed at encouraging many filmmakers to develop their films in the Irish language.

The Dingle International Festival has been on the road since 2007 and it has only served to go from strength to strength each year.

Heanue’s ‘Silence’ was nominated as the winning film from the Físín Pitching Competition as Heanue had to compete with four other nominees before his film was announced the winner.

Being a native of Connemara, he is delighted with the result of his film ‘Silence’ being produced by IFTA winner Eamonn O Cualáin. Speaking about the win, Tristan said,

“I am really thrilled to win. I’ve had this idea for this film for a few years and it’s a great feeling to know it will be made this year. Dingle Film Festival is one of my favourites. They have always supported my work down through the years and I’m so grateful to get the opportunity to make this film with them.”

“The film will be called ‘Silence’ and it is about a couple going to visit their daughter in hospital after a suicide attempt. It shows a couple struggling to communicate their feelings to their daughter or talk about what has happened.”

“The idea came from a real meeting I witnessed between a family in a treatment centre while I was visiting a friend a few years ago.”

While Tristan embarks on a new voyage with ‘Silence’ he is currently overjoyed with his film ‘A Break in the Clouds’ being premiered on RTE2 this evening 2nd April at 11.45p.m.

Wrap up warm tonight, get the popcorn ready and finish off those easter eggs in style while watching ‘A Break in the Clouds.’