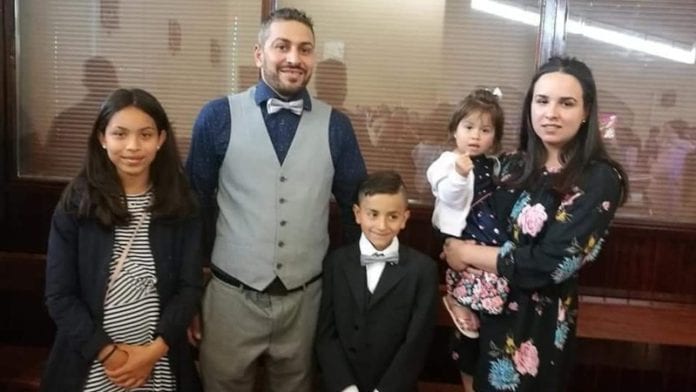 A popular Athenry man who was facing deportation tomorrow has had his removal postponed after his family brought his case to public attention.

Lucivaldo Araujo Silva was being held at Cloverhill prison ahead of his scheduled deportation on Tuesday.

Minister for Justice Charlie Flanagan has now said that this will not be going ahead, and that his case is being reviewed.

Lucivaldo and his wife Danielle arrived in Ireland 13 years ago from Brazil, and all three of their kids, Stephany (12), Bryan (9), and Nicole (2) were born here in Ireland.

He had been in Ireland on a work permit while Athenry became his home in the past 12 years he has lived there.

But the permit expired and was never renewed, which ended up resulting his arrest.

The Fianna Fáil TD confirmed that Silva will not be deported tomorrow and is being released from Cloverhill today.

She said that the family are “overwhelmed with joy that they will get to see their dad again.

Councillor Gabe Cronnelly, who visited Cloverhill with Lucivaldo’s wife Danielle said that he was “Absolutely delighted to have been involved in this case along with Deputy Ann Rabbitte and to everyone else who genuinely supported this family in their time of need.

“Athenry stood up and was counted with the tremendous support and unity for Lucio, Danielle, Stephany Bryan and Nicole.”

More than just local politicians were involved in this effort, with local teachers, businesses, and other members of the community in Athenry and beyond rallying to the cause of the Mr Silva who is well liked in the town.

A petition calling on the Minister to halt his deportation attracted over 1,500 signatures in less than a day after this story was brought to public attention.