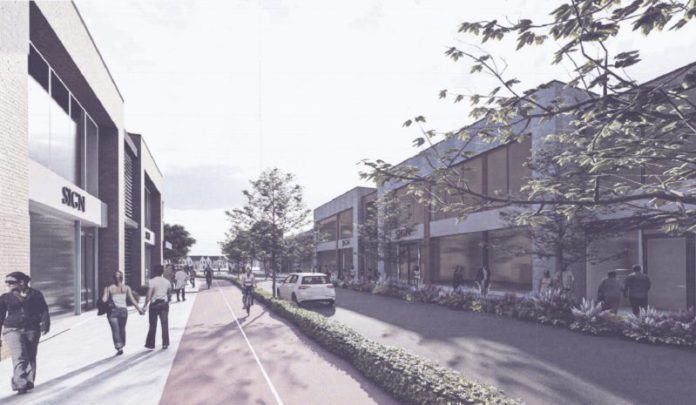 An Bord Pleanála has refused planning permission for the first phase of a new ‘Urban Village’ in Galway City, a large commercial development.

The Bord rejected an appeal by 1 Kingstone Land Limited against the city council’s earlier decision to reject the plans for ‘Kingston Cross’, on the south side of the Western Distributor Road.

The proposal in this planning application was for a supermarket with undercroft car parking totalling 258 spaces and 148 bicycle spaces.

Also in this application was a retail warehouse with 136 spaces of surface car-parking, nine retail units, two medical or community use units, and a café/restaurants.

Other works in the project would have involved landscaping works, including the creation of a civic space with play and exercise areas, a covered sports courts, and a new access route off the Western Distributor Road.

The second phase of the project would have dealt with the residential aspect of Kingston Cross, primarily located at the south end of the site.

In refusing permission last July, the city council criticised the design and layout of the development, and the poor mix of facilities in an area designated as a District Centre.

The council was also highly critical of the proposed civic square, saying that it was limited in size and usage, and dominated by shops, and the public street frontage.

Serious concerns were also raised about the potential traffic hazard created by the new junction onto the Western Distributor Road, which would also interfere with plan in Galway Transport Strategy.

In its appeal against the city council’s decision, the developer rejected criticism of the design, layout and proposed linkages, saying that the council’s reasoning lacked clarity or a proper explanation.

The appeal said that the design is fully compliant with the City Development Plan, providing connectivity between Phases 1 & 2, and surrounding areas, a good and lively frontage onto the Western Distributor Road, and a good mix of smaller and larger unit types.

Criticism of the civic square was also disputed by 1 Kingston Land Limited, saying that it was sufficient in size at 2,710m², with high quality landscaping.

The developer also stated that the junction was ideally located minimise traffic impact, and that infrastructure upgrades in the area in the future would also help with this.

Galway City Council, in response to the appeal, said that it stood by its original assessment of the plans and request that the refusal of permission be upheld.

The Bord said that the design was deficient for its lack of smaller retail and service units, lack of community facilities, and the substandard public plaza.

The Bord also said that it was not satisfied that the project wouldn’t create a traffic hazard, or have an adverse impact on the Galway Transport Strategy by obstructing public transport, pedestrians, and cyclists.