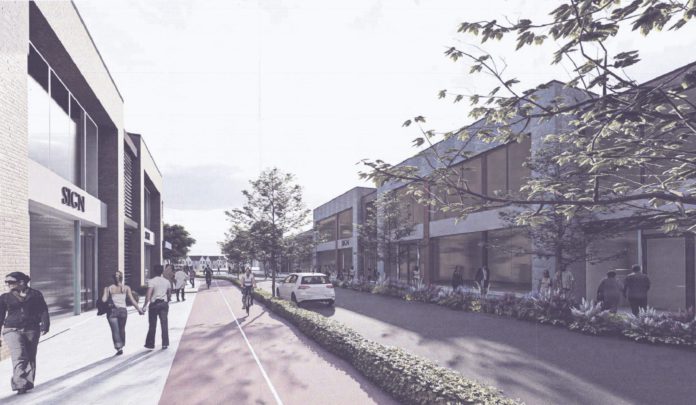 Planning permission has been refused for a large scale commercial development in the Kingston area of Galway city, which was meant as the first phase of a new ‘urban village’.

Plans were submitted by 1 Kingston Land Limited for Phase One of a proposed urban village on the south side of the Western Distributor Road, across from the Gateway Retail Park.

The first phase of the proposed ‘Kingston Cross’ development would have consisted of a licenced supermarket with 258 spaces of undercroft car-parking. A total of  148 bicycle spaces were also included in this application.

Also in this application was a retail warehouse with 136 spaces of surface car-parking, nine retail units, two medical or community use units, and a café/restaurants.

Other works in the project would have involved landscaping works, including the creation of a civic space with play and exercise areas, a covered sports courts, and a new access route off the Western Distributor Road.

The council said that as the area which is the subject of this application is part of the designated District Centre in Rahoon and Knocknacarra, granting approval for development would be premature until an overall layout of the area is agreed on.

The report by the planning department said that the layout of the site in the application is identical to the one show at a pre-planning meeting, where a number of concerns were expressed and the developer was asked to further liaise with the council.

The proposed design and layout of the development was also criticised by the council, which said that it had “poor urban form”, lacked proper linkages between the two phases, and didn’t have the appropriate mix of uses required for the District Centre.

A lack of proper public open space was also raised, with the proposed communal spaces at the north of the site described as “incidental”, while the civic square would be limited in size and “entirely dominated” by the adjacent commercial units.

Including the play area and covered sports area with the proposed civic square was also unacceptable the city council said.

The other concerns raised by the council were that the project could interfere with future bus corridors, and that the developer hadn’t shown that they had “consent and sufficient legal interest” in lands overlapping with the neighbouring  An Logan estate, which appear to form part of the planning application.

Phase 2 of this development was to focus on delivering the residential element of the urban village, focused along the south end of the site, along with additional open spaces.