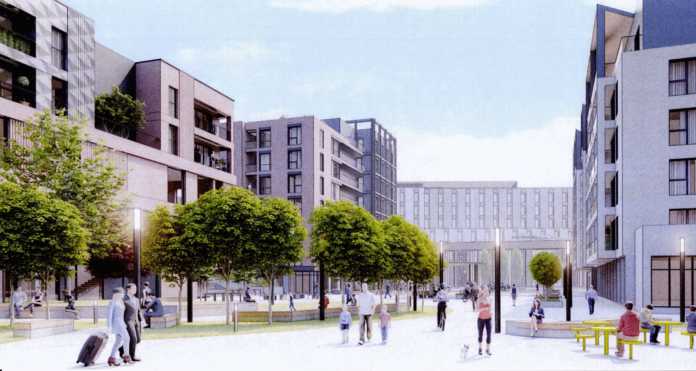 An Bord Pleanála has overturned planning permission for 248 apartments, along with a hotel, leisure centre, and office blocks on the outskirts of Galway City.

Planning permission was granted to Strategic Land Investments LTD in August, 2021 for a large-scale commercial and residential development at City North Business Park on the Tuam Road.

This would have consisted of eight blocks of apartments, ranging from two to eight storeys tall, as well as four office blocks between four and five storeys in height, with a total floor space of 25,527sqm.

The project also included a 222 bedroom hotel, along with a leisure centre with an indoor swimming pool and gym.

For public open space, the developer has inserted a central park area where one block of housing was omitted, and landscaped green areas will also be created along the eastern and western boundaries of the site.

Access to the site for vehicles was to be from a new signalised junction onto the N83 Tuam Road, with additional pedestrian and cycling links at other locations.

This decision was appealed to An Bord Pleanála, which ultimately overturned the city council’s approval based on the land zoning, and the likelihood of high car traffic.

The board noted that the site is zoned C1 for ‘enterprise, light industry, and commercial’ uses other than reserved for the city centre, and that it is located in an ‘outer suburb’ area which lacks accessible and frequent public transport.

In refusing planning permission, An Bord Pleanála said that the project would “materially contravene the zoning objective of the site”, and be contrary to the development policy of the city.

It also stated that the development would, “result in dependency on unsustainable commuter-driven trip generation by private car on the N83 and national road network”.

This would be in conflict with the relevant guidelines issued by the Department of the Environment, Community, and Local Government in 2012.

“The proposed development would, therefore, be contrary to the proper planning and sustainable development of the area.”