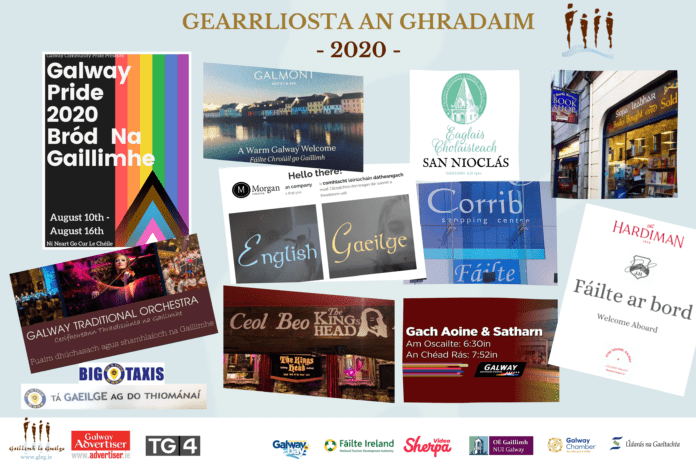 Gaillimh le Gaeilge has announced the shortlist of 11 successful nominees who have been selected as this year’s finalists for Gradam Sheosaimh Uí Ógartaigh 2020.

At a meeting held over Zoom, there was much discussion between the Moltóirí as to who would be selected to go through to the next stage of the Gradam and move one step closer to becoming ‘The New Tribe of Galway’.

The businesses and organisations selected for the Gradam Gearrliosta 2020:

The winners will be announced by Keith Finnegan in early November – and is a great opportunity for all those involved to promote their bilingual endeavours.

“Despite the difficulties faced by businesses and organizations this year, the enthusiasm and commitment shown by the Gradam nominees over the last few weeks is remarkable.

The Moltóirí will meet again via Zoom on Monday 19 October and Tuesday 20 October to interview all the 11 finalists and select the category winners and the overall winners.

Over the coming weeks, a short video will also be made of every business on the Gearrliosta highlighting their bilingual work.

The videos will be made available on their social media as well as Gaillimh le Gaeilge’s and the Gearrliosta’s social media network.