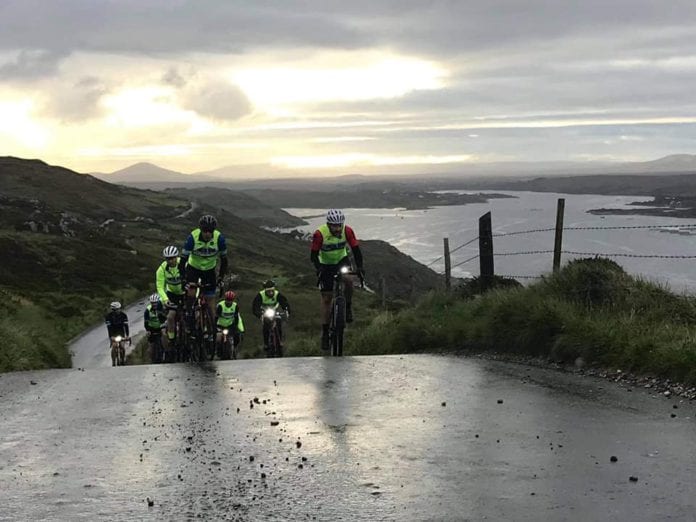 A group of 12 cyclists in Connemara raised almost €4,000 for the Clifden RNLI lifeboat station with their hill cycling challenge in September.

The Twelve Bens Cycling Club undertook a 17km cycle that was made far more challenging by its steep and winding hillside nature.

The challenge consisted of a dozen laps of the ‘Sky Road’ loop, known for its steep routes, with the 12 cyclists pushing through a testing 230 metres of elevation per lap.

Event organiser Simon O Hora said “We came up with a challenge we could do locally as travelling for training wasn’t an option due to Covid 19 restrictions.”

“As a club, we wanted to do something that would push ourselves mentally and physically and one where we could see the sea on every lap-to remind us why we were doing it.”

The group were joined by some support cyclists and stewards and a small outdoor gathering of socially distanced supporters to encourage them in their challenge, which they hoped to achieve in less than 12 hours.

The Challenge raised €3774 in donations before taking place, and another €520 was collected in RNLI buckets on the day. The final sum going to Clifden RNLI was €4,294.

The weary cyclists beat their target time by a substantial margin, coming across the line for the final time in 10 hours and 12 minutes.

“In this most challenging year for all charities, the Twelve Bens challenge has provided a very welcome donation to the local Clifden lifeboat crew,” said Catherine Pryce on behalf of Clifden RNLI.

“It was an extremely well run event, all carried out within the necessary public health guidelines and we congratulate the cyclists on their achievement and thank all who donated for their ongoing support”.