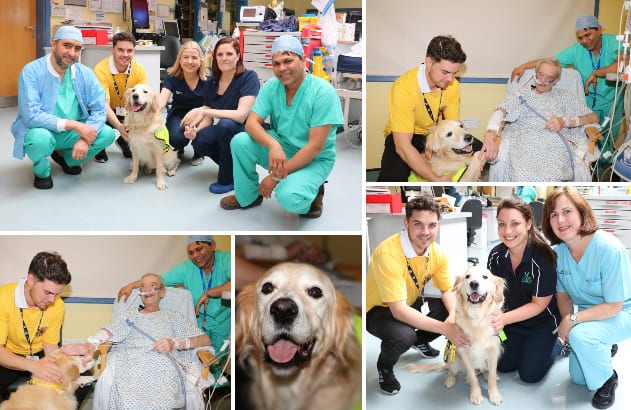 Cody is a 6 year old Golden Retriever who comes through the doors of Portiuncula Hospital once a week to act as a therapy dog proving a calming and comforting influence for patients in the ICU.

“The isolation and loneliness of not being able to interact with their own natural support system, family and friends can have a huge impact on their physical and psychological status.”

She said that the hospital thought that bringing in a therapy dog would act benefit the body and mind of patients and create a more “humanised” environment at the ICU.

Cody recently made his first appearance at the ICU to meet staff and patients and lap of everyone’s attention.

“He is such a welcome visitor, bringing with him so much warmth,” said Charlotte Carter, “You can stand back and simply watch as the positive energy fills the room.”

Cody will be coming by Portiuncula Hospital for one hour every Thursday to visit everyone at the ICU.

His owner and handler Gary Mullin said that he found Cody abandoned by the side of the road at five weeks old.

“From that moment he has continued to bring so much joy into my life and into the life of others. He has such a unique way with people, they just gravitate towards him.”

“I felt there was an opportunity to share the impact that Cody has on me with more people through becoming a volunteer of the Irish Therapy Dogs who have been having a fantastic impact throughout Ireland for many years.”

After they passed the application process and became registered, Portiuncula reached out to the organisation seeking a therapy dog.

Brenda Rickard, CEO of Irish Therapy Dogs said that the “whole atmosphere in a room changes” when a volunteer walks in with their dog.

“And it’s the dog that does it. If you think about it, dogs are probably the best therapists in the world because people feel they can be themselves.”

She added that problems don’t go away, but “people can forget them for a while” when they’re rubbing a dog.

While he’s on the job and in the wards Cody knows that hygiene is essential and clean paws are a priority.  After a busy day he heads home for a well-earned rest and perhaps a little treat or two.