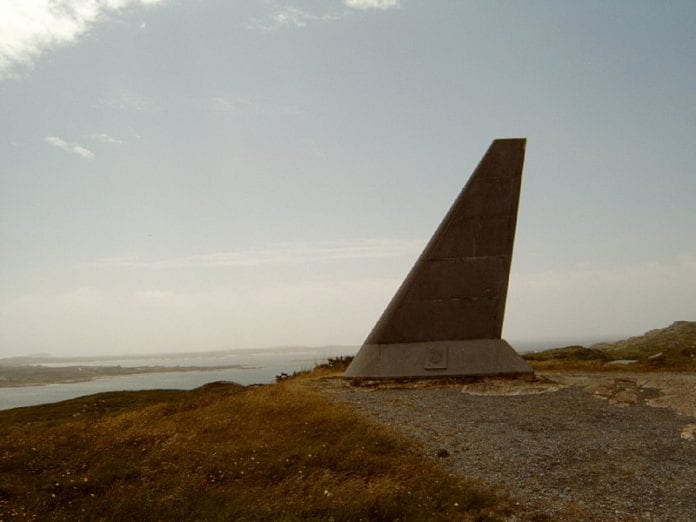 A ceremony was held in Clifden this morning to mark the 100th anniversary of the first transatlantic flight.

John Alcock and Arthur Whitten-Brown made the first non stop transatlantic flight in history in 1919, setting off from Newfoundland, Canada on June 14 and dropping out of the sky at Derrigimlagh Bog on the morning of June 15.

A ceremony was held this morning at the memorial marking the exact spot of their landing at 8:40am, the same time as they touched down after more than 16 hours in the air.

A.J.H. Alcock, Group Captain with the RAF and nephew of John Alcock, addressed the crowd at the memorial and said he was humbled by the number of people who had come out to mark the event.

The centenary festival marking this milestone in aviation history is taking place in Clifden from June 11 – 16.

Aire Stáit @SeanKyneTD and others observing a minute’s silence at the site where Alcock and Brown landed 100 years ago today.

He joined family and friends of the pioneering airmen and @ParcsCanada Reps at Derrigimlagh Bog in #Connemara National Park for special Ceremony pic.twitter.com/69rRRPp3Ld

A play commemorating their voyage Those Magnificent Men is being performed at the Station House Hotel in Clifden both this evening and Sunday.

Described as a “nail-biting, side-splitting true story of this daredevil flight”, Those Magnificent Men is written by award winning duo Brian Mitchell & Joseph Nixon and produced by The Foundry Group.

This morning also saw a number of planes take part in a fly over of Clifden and a joint landing at Cleggan airstrip.

A street parade commemorating the transatlantic flight will take place in Clifden this afternoon from 3:30pm to 4:30pm.

An Post have commission a memorial stamp and an Alcock and Brown commemorative coin has been minted.

The famed statue of the two men which normally sits at Heathrow has been loaned to Clifden for the duration of the festival.

Best of all, Clifden’s Bridewell Brewery has made two special edition craft beers in honour of the pilot and navigator.

More events will be taking place over the weekend for this festival which can be seen at the Alcock and Brown 100 programme here.