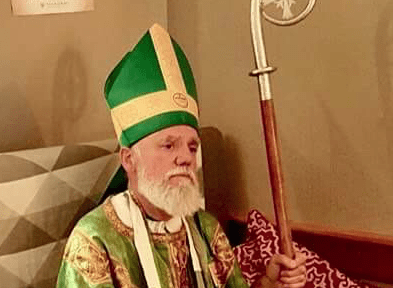 If you see him, you’ll do a double take. He’s St. Patrick’s in the flesh.

Tom Keefe took on the persona of St. Patrick on a whim back in 2013 when a friend and Irish pub owner in Spokane asked him to add a bit of spice to the annual St. Patrick’s Day celebration.

After all he had played an integral role in tying the cities of Seattle and Galway together as sister cities when he worked as legal advisor for Seattle Mayor Charles Royer in the 1980’s; he is dedicated to his heritage and let’s face it…he looks the part.

He sees St. Patrick as a crusader for human rights who spoke out against slavery. Keefe himself is also a saintly protector of rights for the Native American Indians, having legally defended David SoHappy in a history-making battle over native American fishing rights on the Columbia River.

So when he decided to turn that case into a book, he decided on Ireland as where he wanted to settle for a few months to write. He landed in Skibbereen as a quiet and notable town for a home away from home.

I saw a presentation he did on the fishing rights case at the Galway City Museum a few weeks ago and it was fascinating. He’s just finished up his sabbatical to write and has headed back to the Pacific Northwest.

But it’s kind of a hobby of his to show up as St. Patrick, in Skibbereen, Galway, Spokane, Seattle and even in whimsical places like on a school bus in Ireland or climbing an 8 th century tower in Clondalkin.

He says he dons the vestments whenever the spirit moves him. So keep your eyes peeled. You never know where he’ll surface next.