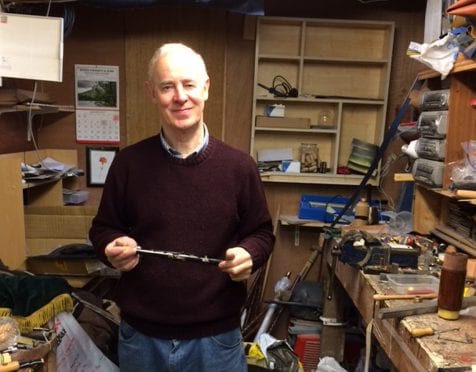 If you live in Galway you know that traditional music is a mainstay and there is no shortage of world-class musicians here.

You can find them at the Crane, Taaffes and Tig Cóilí most nights. But did you realize that this area is also where a lot of the traditional instruments are made?

Michael Vignoles was raised in the Claddagh. To this day he lives in that same house and he’s added to it with a workshop that turns out bodhrans and uilleann pipes.

His workshop is a series of long narrow rooms off the main house. Racks of tools, stacks of materials and lots of pieces and parts are strewn about in clear artist style.

But he knows exactly where to find everything he needs. And on this day he is cracking cane and filing it just so, creating the perfect reeds for his pipes.

“You know it’s good cane when you hear that crack,” he tells me.  “Then you have to file it, band it with copper and test each and every one, because the tone changes as you play.” And he sits down to check the tone of the reed he has just filed.

“I didn’t set out to make uilleann pipes,” he says. “I played them myself and they needed repair. So I became an apprentice to learn to fix them myself. And it’s all led me to this,” he says surveying where he feels most a home.

Michael has become known far and wide for his craftsmanship of these pipes, his ability to repair them and to build them from scratch.

He’s also known far and wide for his playing. If you are lucky enough you might catch him in the pubs along Shop Street, or even in the Galway Cathedral on an occasional Sunday morning.

You can hear more about him, his craftsmanship and his playing in this segment of Erin’s Isle, a podcast aimed at sharing Irish Tradition with the world.

(45 seconds of him talking about the pipes and playing)

You can hear more from Michael Vignoles and about the Galway Cathedral at http://erinsisle.libsyn.com/erins-isle-episode-004