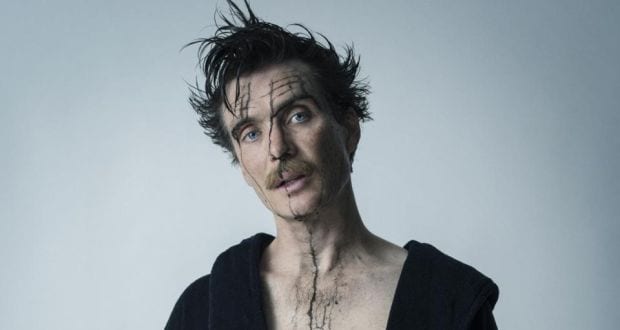 Galway City is alive with the sound of Cillian Murphy’s multiple voices.

Enda Walsh’s latest play Grief is the thing with feathers premiered in Galway’s Black Box Theatre this week – and the city may need some time to recover.

Based on the Max Porter novel of the same name, Grief tells the story of loss. Two young sons and their dorky Ted Hughes-loving father have lost their mother/wife to a sudden accident, which brings a surprise houseguest in the form of Crow – the embodiment of their grief.

With such a simple premise, the story is hardly plot-driven. Yet there is enough going on to satisfy the most attention-deficit minds.

Walsh manages to capture the changing prose and poetry of the novel, using light and sound to great effect – often intensely so – and intertwining the surreal with the ordinary actions of a family trying to remember how to act in the worst of circumstances.

The children eat sandwiches and watch cartoons while their father (Cillian Murphy) engages the menacing black presence in the house, swirling papers and snowflakes and feathers in a macabre dance, revisiting memories and casting out demons.

And oh, did we mention that Cillian Murphy is in it? Although calling it a one-man play would do the two young and talented actors who play the sons a disservice, it is essentially a one-man play.

Murphy carries it. He is brilliant as both Dad and Crow, and with only a bathrobe – no feathery costume – to aid the audience’s imagination. The actor certainly deserves all the hype that his name generates.

Jumping, climbing, and cavorting all over the stage (and even off it), Murphy’s first foray into the deeply disturbing Crow voice will stick with you long after the last curtain call.

Crow is at first terrifying and all-encompassing; light and dark, crashing words, disturbing and overwhelming to the audience as well as the family it has joined.

But like grief itself, eventually the character becomes familiar, even friendly. It babysits the kids on family holidays. It defends the nest from storm-driven demons. And occasionally, it morphs back into their father.

Only a few moments in the unbroken two-hour performance ring false: namely, the clichéd nostalgia-inducing Hollywood-style video footage of Mum at the beach, and a sequence where the kids watch potential mum-replacements on TV, which starts off powerful but ends up almost pathetic, as they repeatedly jump at the images.

The young actors, however, are fantastic, very believable in their roles. Particularly captivating is a scene in which a story about two brothers is rolled into the narrative.

And throughout the heart-wrenching experience funny moments are unearthed like truffles, earthy and enriching, reminding the audience that these characters (and this story) are likeable, too.

Although Grief is the thing with feathers can be incredibly intense, ultimately, it is a story about healing and recovery.

And Cillian Murphy is in it.

Grief is the thing with feathers is running in Galway’s Black Box Theatre until 24 March.