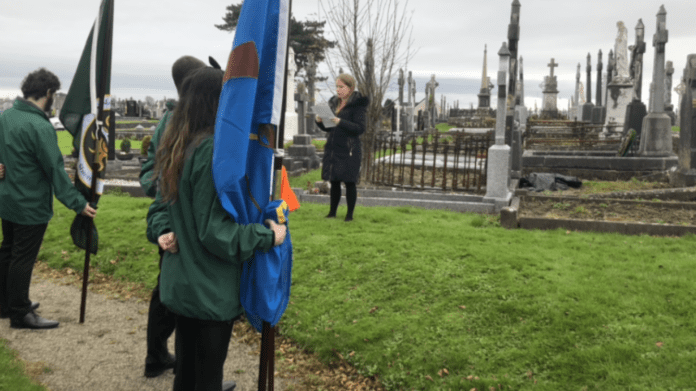 Mícheál Breathnach was elected as a Sinn Féin Councilor for Galway’s East Ward in 1919. He subsequently met his death through summary execution by the Black and Tans. Among those in the crowd was the family of Míchaél Breathnach.

Giving the oration at Bohermore Cemetery on a darkened Tuesday afternoon, the City East Councilor remarked that ‘commemorations give time to reflect on the kind of Republic that we want’.

“What we want is not some aesthetic change in the make up of this Country, we want a fundamental transformation of the society in which we live,” she said.

The Sinn Féin Councilor asserted the onus to remember Galway republicans like Mícheal Breathnach who she said was murdered for his belief that Ireland could be a completely different place.

In addition, she affirmed that although it was a different time these Republicans were activists ‘just like us’.

Mairéad Farrell made a point in stressing her belief that Sinn Féin are challenging the cosy consensus of the establishment by contesting the presidential election. She then emphasized how crucial it was to proudly campaign and canvass for Líadh Ni Riada ‘to show people that things can be different’.

Cllr. Farrell highlighted her belief that Ireland was on the cusp of great change evidenced by the increasing conversations about a United Ireland on the back of Brexit. The Councilor was quick to point out however, that in her view the reason why there is no United Ireland today lies with both the London and Dublin Government.

In making reference to the homeless and housing crisis, the Sinn Féin Councilor referenced a prediction by Galway Republican Liam Mellows that ‘whoever assumes power in the 26 County State would cling onto that power’, and she believes that this prediction has been proven true.

For this reason, Mairéad Farrell urged the people of Galway to vote and support the Líadh Ni Riada as the next president of Ireland in an attempt to give the ‘cosy consensus’ a challenge.

The commemoration was organised by the Galway West Sinn Féin youth wing named after Míchaél Breathnach.

Speaking to Galway Daily, the Chairperson, Jasmine Shaw stated how in her opinion the state has ‘failed abysmally to commemorate republicans with dignity or respect’.

In addition to this, Jasmine expressed her pessimism that the state ‘will only commemorate republicans in a tokenistic manner whenever public opinion demands it’. Jasmine then elaborated on her plans for the day which included canvassing for Sinn Féin’s Liadh Ní Riada in the Claddagh.

It is clear the canvass team for Liadh Ní Riada has tough ask to even get their candidate in second according to the polls.

Despite this, the Sinn Féin team are as eager as ever to canvass Galway.

They have little to lose and are determined to try and make some impact.