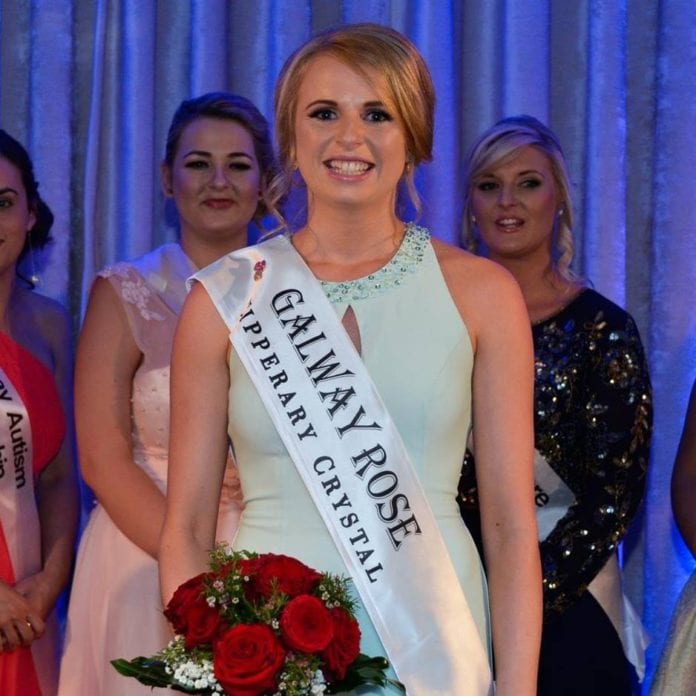 The current Galway Rose has just one day left until she hands over her title to a new ambassador for the City of The Tribes.

The 2018 Galway Rose Selection will be held at the Clayton Hotel Galway, tomorrow night, Saturday the 19th May from 7p.m., where current Galway Rose Niamh Elwood will hand over her title.

The softly spoken, Niamh Elwood who was sponsored by Nox Hotel looked back on her year as the Galway Rose with happiness and strongly encouraged every young girl who has ever dreamed of applying to “just go for it”.

“You’re so afraid of what it’s going to mean to you, so you’re like, oh what if people might think I’m not any good at this or whatever. So I said I’m just going to go for it and I applied. ”

“I had done so much travelling the year before that and I was like if I’m not going to go away for a year I want to do something new. I want to push myself so I think it just drew me in the fact that there’s so many women getting to know people all around the world.

“I know people have other words for it but it’s such a great thing to push women and to show how good we are in this world. I was just impressed by that.

“I think that’s really what pulled me into it. I just wanted to meet new people especially and it was such a great year for me and my family so it brought us all closer together as well.”

The 24 year old nurse works in the University Hospital in Galway and is a true Galwegian at heart. She grew up in Castlegar, and her granny is from Woodquay so, “we’d be real Galwegians”.

Niamh spoke about how the Rose competition brought her and her family even closer than they already were and how perfect the year went for them.

“My dad is such a Galway man, so this year actually was a great year because Galway won the All-Ireland and then my brother was playing and my dad was a selector on the team that won the county final this year in the hurling.

“So it’s been brilliant. That was my run in Croke Park – being in Tralee with the Galway Sash on. I’m so happy to have had the chance to do it.

“There’s a saying that they said in Tralee and it was the opportunity of a lifetime can only be seized in the lifetime of opportunity. I remember thinking that’s so true so they’re basically saying if you want to go for it you have to do it now or you’ll never get the chance again.”

The most emotional part of it for me was and I wouldn’t be an emotional person but everyone had a day down in Tralee where they were upset and I hadn’t actually and one of the girls said it to me. I said I’m not really that kind of emotional person but I get emotional when someone makes me proud or something like that and the night that I was on stage which was the second night and all these people were at the door roaring and shouting for you when you’re going out. There was hundreds in the lobby and we all had to be walked through so I walked through and my granny and granddad were there and all my friends. Sure my friends were grabbing me and everything like that and then I went down the steps and across to the Dome and there was a few people around the steps but down beside where the Dome was my dad. He was just standing there on his own and he was just clapping. He had tears in his eyes and I was like oh my god please don’t make me cry. Not now. I’ve my hair and make up done. Not now, not now, but I just knew at that moment he was so proud.

The Rose of Tralee Competition is not all about the nights of fame on the television with much more happening behind the scenes in the lead up to and after the competition. Niamh spoke about how involved she became with different charities something she hadn’t thought would happen.

“I didn’t realise how much involvement I was going to get with different charities like I spent an awful lot of time with Galway Hospice. I done a lot with them which obviously I would have close connection with the fact that I’m a nurse and the fact that I’ve often had to refer people onto the hospice so it was lovely to spend time with them and anything they’ve asked me I’ve tried to do.

“I never realised how big of a connection the Rose of Tralee Competition had with Adi Roche’s Chernobyl Charity and that was probably one of the most life changing things I’ve ever done going to the orphanage over there.

“I never thought I’d get that involved in things until the Rose of Tralee kind of bought that around. I didn’t realise that they had such close connections with things. So that was one surprise.

“I think everything surpassed my expectations but I kind of had an idea of what was going to go on when I went there but I just didn’t realise how much I would have loved it, especially my family, my mum and Dad speak about the week in Tralee on a daily basis – it was just something that we all really cherish now. It was such a great part of our lives.”

Niamh spoke about the experience as a whole, from start to finish and has said she wouldn’t change it for the world. The friends she has made from all over the world, the boost in confidence she has received through being able to stand up and talk on stage, her involvement with charity work, her adventures throughout Ireland and countries abroad.

“Obviously the first night, even if you don’t become the Galway Rose, to be able to get up on stage in front of your family and friends and talk about yourself is a massive thing to do and everyone’s so proud of you – when you come down it makes such a difference.”

From becoming the Galway Rose, to standing on stage in the Dome in Tralee, Niamh has enjoyed every single moment and has strongly encouraged other young girls who have always dreamed about getting involved to go for it.

“What’s for you won’t pass you. If it’s meant to be it will, but I think regardless of that you know even if you don’t get through and you don’t become the Galway Rose – I  just think it’s a great thing for people to do. It’s such an achievement for anybody to get up on stage as I’ve said before and the confidence that it gave so many girls to get up and do those kind of things.”

Niamh hands over her title to the next Galway Rose tomorrow night at 7pm in the Clayton Hotel.