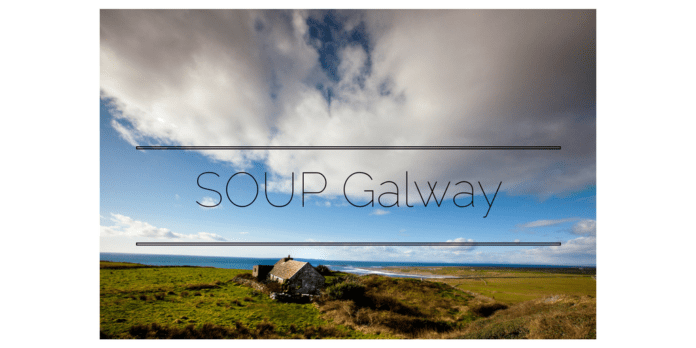 Have you got a great idea for making Galway City a better place? Is it environmentally focused?

Galway Green SOUP is looking for ideas for their next crowd fundraising event on September 27!

Their mission is to promote community-based development through crowdfunding, creativity, collaboration, democracy, and fun.

The Green SOUP event – part of the Loving Galway Festival – will see four presenters talk through their ideas to make Galway greener.

Participants pay €5 at the door, which buys a bowl of soup, bread, and a voting ballot.

After the presentations, attendees vote on which idea they liked best – and the winner gets the funds raised at the door to help make their idea a reality!

“You don’t have to be a registered charity – you can just be one person with an idea,” said Galway City Partnership Social Enterprise Development Officer Eileen Lauster.

“It can be anything from anybody. If an eight year old child had a really good idea, they can stand up and present.”

This will be the third Galway SOUP event, and the first with an environmental focus.

They are calling for ideas to improve the lives of people in Galway as well as the environment.

Ideas should be submitted through a short application on the Galway SOUP website by Thursday, 13 September.

Four proposals are then selected by the Galway SOUP committee to be presented at the event, which is scheduled to take place on 27 September.

Presentations last four minutes each, and presenters are asked to answer four questions from the audience.

Then participants can discuss the proposals over soup and bread, before finally voting for the proposal that will win the money collected at the door.

The winning presenter also agrees to attend a future Galway SOUP event to report on how they used the money.

Previous winners include social inclusion organisations The Melting Potluck and Walk the Talk.

The Melting Potluck aims to welcome refugees, asylum seekers and others to Galway by hosting potluck dinners that provide cultural exchange.

Walk the Talk aims to help those in Direct Provision and in the wider Galway community improve their mental health through exercise and other dynamic activities.

Ms. Lauster commented, “Galway SOUP is becoming a popular event,” adding that the hardest thing is getting proposals.

All Galway SOUP events are held in the Corn Store and hosted by Temple Café.

Organisers hope to continue to run the events at least twice a year, in spring and autumn.

So far they’ve been averaging about 50 people and raising a few hundred euros for each good cause.

But they hope raise awareness and get more people involved to grow a sense of community.

The very short application form can be filled out on the Galway SOUP website at galwaysoup.wordpress.com.

Galway SOUP is co-funded by the Irish Government and the European Social Fund as part of the ESF Programme for Employability, Inclusion and Learning 2014-2020.