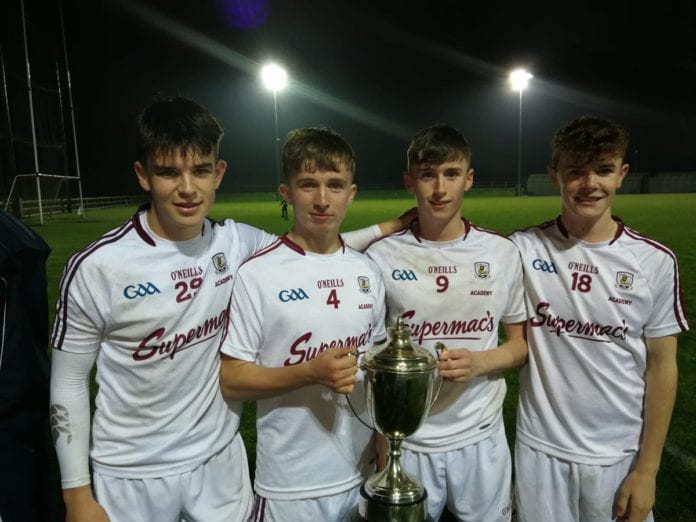 Galway football were celebrating two provincial titles on Friday (7th September) evening as both maroon and white outfits came home with silverware in the annual Ted Webb Finals at the Connacht GAA Centre of Excellence in Bekan.

The ‘City and West’ team, captained by St. James’ Daniel McNulty, were the overall winners taking the cup competition by 1-13 to 1-8 against Mayo East/West.  Despite conceding an early goal, the Tribeswomen led 0-7 to 1-1 at the break and a second half major ensured their success.

And it capped off a double against their rivals as Galway North were comprehensive winners in the Shield Final beating Mayo East/West by 3-10 to 0-9.  The team, captained by Monivea/Abbey’s Keith Reilly, struck early to lead 1-5 to 0-5 at half-time.

The Connacht GAA Ted Webb Inter-County U16 Football Competition has been played in Connacht every year since 1976, in memory of former Mayo and Ballyhaunis Player, Ted Webb.

Webb tragically lost his life in a car accident on February 19th, 1976 and was a key member of the Mayo senior football team and a successful member of the 1974 Mayo U21 team.

The Connacht GAA Ted Webb Competition involves a total of seven teams representing the five provincial Counties. Players taking part must be under 16 years of age on the 1st of January 2018, i.e. have a date of birth between January 1st and December 31st 2002.

And at the end of the Friday evening, it was double gold for Galway who achieved provincial honours.