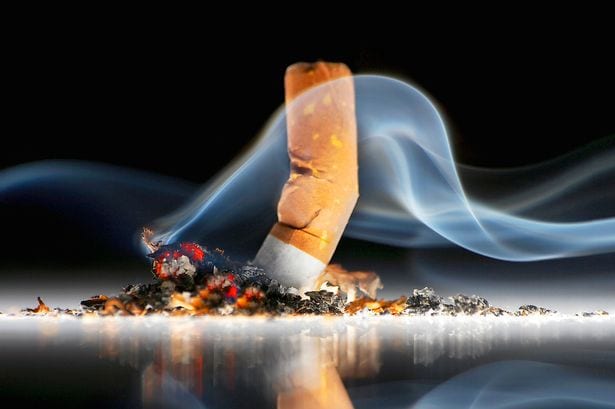 I was leaving Costcutters in Ballinasloe on Monday and I had a strange feeling seeing a woman standing at the doorway smoking a cigarette.  It was a special day, a good day, as I had a piece in the Irish Examiner which was pretty cool.

Now, before I start making speeches about being healed or all that, I must reiterate that that was the first time.  We were out twice over the last week, a rare luxury for us.  And my feelings about cigarettes were completely different.

First, I should mention that I didn’t smoke though I’d like to think you’d assume that now.  But it did cross my mind a good bit over the Wednesday and Saturday nights we were out to celebrate Martin’s 40th birthday.

I didn’t have a craving and I didn’t want to smoke.  But you know the way your mind plays tricks when you have a couple of drinks.  Well, mine was trying to tempt me into thinking I wasn’t allowed one rather than not wanting one.  And you know how tempting something can be when you’re told NO!

But I didn’t and it’s pretty much a habit now.  The idea of going outside doesn’t register with me anymore.  It was just a couple of moments over the two nights that my reminiscing turned to fondness.  But Monday’s lady was a sober reminder that I’ve moved on.

We had two great nights out and it was really great catching up with friends.  Many of us hadn’t been together since Shane and Ger’s wedding, the night where the idea of this diary came together.

And admittedly I’ve started to get outspoken, volunteering willingly perhaps, that I am eight weeks off the cigarettes.  Date wise, it’ll be two months on Friday.  And I have to say that does make me very happy.

Its been 4months since I quit cigarettes

I’m 5kgs away from my goal weight

My mom’s health is improving

I may not have as many as I thought I did but the ones who’ve shown up have shown me that I have the most supportive friends in the world.

Of course, two nights out means two days recovering so I don’t need to say how stressful catching up on work was.  And the reason you’re reading this on Wednesday morning rather than Tuesday night is because we had championship action again tonight (Tuesday).

Despite all the snow, weather warnings and rain, there’s something sweet about the first midweek match that doesn’t need floodlights.  It’s like the summer is slowly fighting its way into our lives and after this winter, I think we’re all glad to see it when it finally does arrive.

We had a heavy gas bill this week.  I can understand it being higher than usual but the total looks like two consecutive winters two months apart.  All you need is a few Game of Thrones characters and a couple of thousand White Walkers and we’re sorted.

It was a great week on the Galway sporting front.  Glenamaddy Community School and Colaiste Bhaile Chlair won All-Ireland schools ladies football titles.  And Galway’s minor camogie team are back in the All-Ireland Final.  A brilliant week for underage sport in the county.

And it doesn’t stop there.  Galway go in search of a Ladies National Football League final against All-Ireland champions Dublin on Sunday in Kinnegad.  I give them an outside chance but it’s vital they are competitive and don’t suffer hammerings like against Donegal and Cork last year.

And the second round of the senior hurling championship takes place nd I’ll be at a double header on Saturday in Duggan Park.  Tommy Larkins against St. Thomas at 4pm followed by Loughrea verses Cappataggle at 5.45pm.

On a final note, Meelick/Eyrecourt were deserving winners tonight pulling away to win 2-15 to 0-11 over Rahoon/Newcastle.  But the city side were without Eamonn Brannigan.  And while Annaghdown’s game against Killimor was called off, I heard they wouldn’t have been allowed play Damien Comer anyway.

Eamonn Brannigan showed pace and skill for @Galway_GAA, as they beat Kerry in the #AllianzLeagues! But is he your https://t.co/gvXdqh656y Player of the Week? Voting takes place on Instagram now! pic.twitter.com/iTdwsdFJDp

Now, there’s nobody who wants to see Galway beat Mayo more than me and I appreciate that the football board are playing two club rounds in May or June.  But isn’t this just defeating the purpose of having April free from inter county action?

No club should ever be without their county players for a championship match!  FACT!  But the intermediate hurling clubs are getting a raw deal.

Last week, they were being shipped around with postponements and fixtured to play midweek matches at short notice.  Today, they can’t line out dual players!

If it’s true that the players weren’t allowed play, then Galway GAA needs to seriously look at itself before the Club Players Association (CPA) start.  I haven’t made up my mind about them yet but they aren’t afraid to talk drastic action if required.  And they were surveying their members this week.

Either way, whether people agree or disagree, this is the club’s month.  I don’t think it’s realistic that they don’t train with the county.  Actually, anybody who thinks that would happen are dreaming.  But they should be allowed play club championship matches.  That didn’t happen tonight it seems.