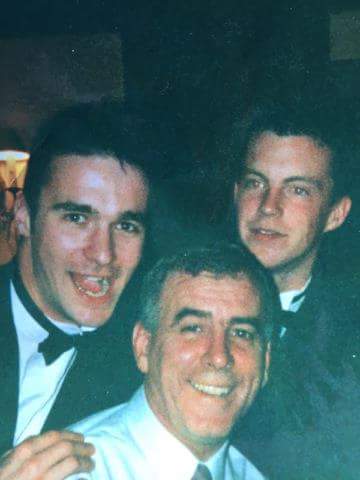 Today, I want to talk to you about Mike.

Mike was my best friend and I lost him this day two years ago to cancer.  It was one of the worst days of my life and I still get upset occasionally when I think about my friend being taken away.

In truth, I should have quit the cigarettes three years ago.  I said I would at the time.  I don’t know why I didn’t (briefly did).  But I never got my head around doing it and eventually slipped back on them.

Mike gave up the cigarettes for Lent in 2015.  It had been in his head and I can say with absolute certainty that he had only one more cigarette since finishing his last packet on Ash Wednesday that year.

He hadn’t felt right.  A man who worked all his life and retirement was never sitting with him.  I’m not going into the personal details of Mike’s health but in April 2015 (one month after he quit the smokes), we got the news that sent shockwaves through us all.

Mike had lung cancer and started the greatest battle of his life.  For a time, it looked like he’d get over the line but never managed to shake it.  As winter came and Christmas passed, it wasn’t looking good.  I watched my friend’s health gradually decline, his energy dropped and eventually his body said goodbye.

Anyone who knew Mike always had a story.  He was quick witted, never backed down from a verbal dispute (:)) and always made sure his family and friends were looked after.  He was the perfect example of somebody who always gave his time to others.

I remember my first conversation with Mike in the East County.  I could be an arrogant thing when I wanted to be and try give a smartarse answer thinking I was funny.  Mike asked me a question one day, I gave a sarcastic answer, he looked at me and asked the same question again.  Without getting angry or raising his voice, he put me in my place.  I learned that day you don’t mess with Mike.

I learned my barman’s trade under Mike’s guidance in the Main Bar of the Tunnel Niteclub.  I went for tea to his house nearly every night after work.  He wasn’t a big drinker but he loved the tea.  When you called to Mike’s house, you didn’t ask.  You just put on the kettle.

Our friendship grew over the years.  He was always the first I called if I needed advice and I became one of his confidants when he needed something.  And in recent years, every Monday night was discussing the weekend sport.

If Galway didn’t play well, I got the full breakdown.  And in return, I’d probably stir the pot doing the journalist thing and making the opposing point whether I agreed or not.  But there is nothing he would have loved more than to have been in Croke Park last September.

Mike had nothing to do with me taking up smoking.  We were actually friends four years before I ever touched them.  And he wasn’t too impressed that I went near them in the first place.  But strangely enough, I ended up on the Carrolls just like he did back in the 1990s.

I’ve been close friends with the McDonnell family and I hope they don’t mind me penning this piece.  Morgan (Mike’s son) hired me in 1995 when I got the East County job.  And it was outside having a smoke at Shane’s (his other son) wedding three weeks ago when this diary idea first came to my mind.

I’m not telling you about Mike to give some anti-smoking speech and preach the evils of the habit.  He’d have killed me if he thought I was doing that.  He’d probably kill me anyway for writing this piece.

I’m telling you about Mike because I miss my friend and I still think about him.  I’m annoyed about the weather because it’s stopped me visiting his grave today.  And I hope it doesn’t box me in tomorrow and deny me attending his anniversary mass.

I could write multiple entries about stories with Mike and some may make it to this diary before we wrap up the series.  Today, I just wanted to remember my friend and anyone who ever met him will vouch that he was one of the nicest people they ever met.  Thank you Mike and we will never forget you.