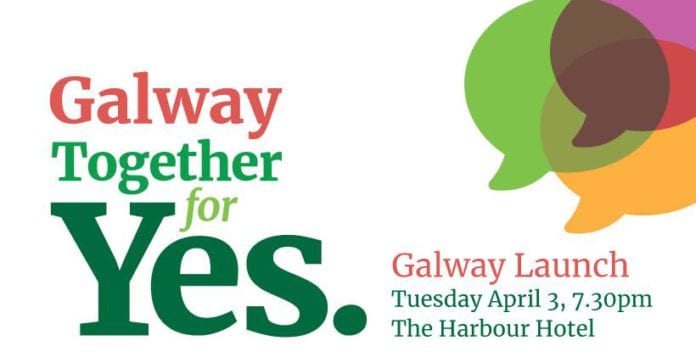 Come out for the official launch of the Galway Together For Yes Campaign!

The campaign – alongside the Galway Coalition to Repeal the Eighth Amendment as well as the national Together for Yes campaign – works to repeal the 8th Amendment in a national referendum to be held at the end of May.

The panel of speakers at the launch includes:
Orla O’Connor – Co-Director of Together For Yes
Arlette Lyons – Termination For Medical Reasons
Eoin Daly – Lecturer from NUIG Law School
Dr Michael Creed – Doctors for Choice
More to be announced soon!

After the huge success of the launch of the national campaign, come join Yes campaigners to get the ball rolling in Galway and to find out how you can get involved!

All are welcome – this is a kid-friendly event.

The Galway Coalition to Repeal the Eighth Amendment is a group of 25+ organisations represented in Galway that support repealing the 8th amendment.