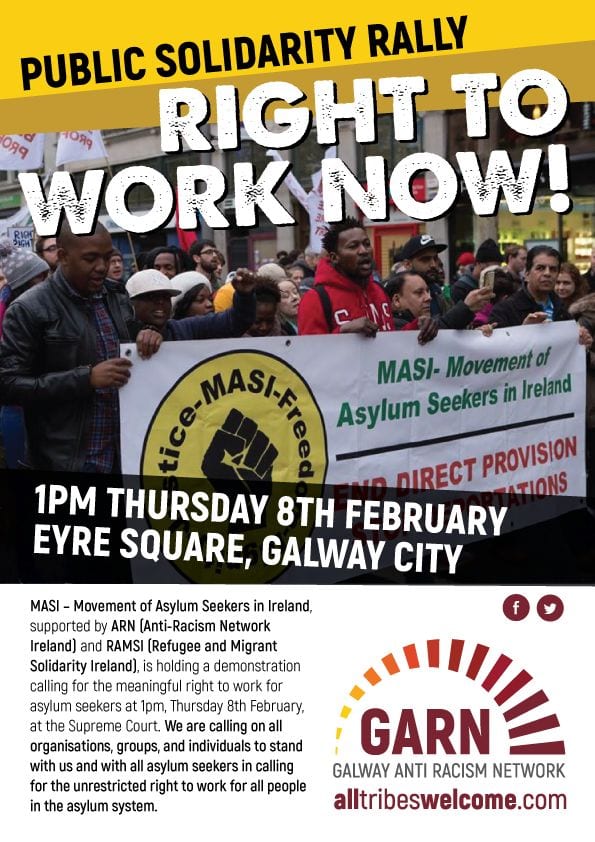 Galway Anti-Racism Network is hosting a rally in Eyre Square to show solidarity with the demonstrations in Dublin against the ban on asylum seekers’ right to work.

The Movement of Asylum Seekers in Ireland (MASI)—supported by the Anti-Racism Network Ireland and the Refugee and Migrant Solidarity Ireland—is holding a demonstration at the Supreme Court calling for the meaningful right to work for asylum seekers on Thursday, February 8.

The Supreme Court is due to make a formal announcement on Friday 9th February about the unconstitutionality of the ban on asylum seekers’ right to work in this state. This follows on from the court’s decision in May last year that this total ban is unconstitutional, as well as a recent Oireachtas motion opting in to a general EU directive on the right to work.

The Irish government has not given any detail of what the right to work for asylum seekers will actually look like, and has now adopted restrictive ‘interim measures’ before complying with the EU directive—without giving any detail about what shape this will take in reality for asylum seekers who want to work.

These interim measures apply the existing work permits scheme to asylum seekers, which is expensive (€500-1000 for a permit) and allows people to work in only a handful of highly paid professions. Even those not living on only €21 a week would be unable to satisfy these conditions. If these interim measures are a taste of things to come, very few people seeking protection in Ireland will have the opportunity to earn their own living or support their families.

The right to work would do a lot towards giving people back some dignity and a sense of normalcy in their lives.

This demonstration will be an opportunity for Irish people to speak loudly, clearly and urgently with one voice to push for a meaningful, unrestricted right to work for all.