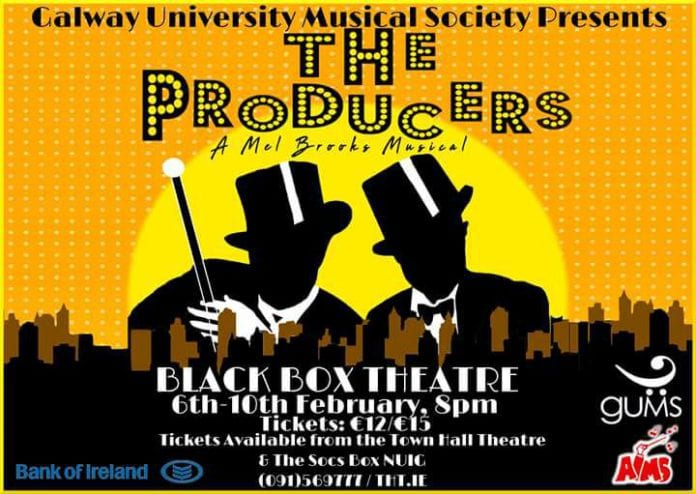 Galway University Musical Society welcomes you in its 18th year to the Black Box Theatre for a rollicking performance of THE PRODUCERS.

Based on the 1968 laugh-out-loud classic cult comedy of the same name and adapted for stage by Mel Brooks, “The Producers” has won a record twelve Tony awards since its debut in 2001.

“The Producers” is a laugh-out-loud, outrageous, crowd-pleasing farce. Fading Broadway producer Max Bialystock is desperate to get to the top of his profession again, and he finds an unlikely ally in mousy accountant Leo Bloom, who hypothesizes that one could make far more money with a flop of a show than with a hit. Together, the two set out to produce the worst musical ever to hit Broadway. The plan? Raise two million dollars to finance the show, and when the show inevitably closes after just one performance, take the money and run! With no shortage of showstopping musical numbers, and Brooks’ signature humor keeping audiences in stitches, “The Producers” is definitely far from a flop.

With an all-student cast and crew bringing a freshness to this timeless classic, GUMS’ production of “The Producer”s is a must-see!

Tickets are available online at www.tht.ie, from the Town Hall Theatre, and from the Socs Box in NUI Galway.

Take a look at what else is on this weekend