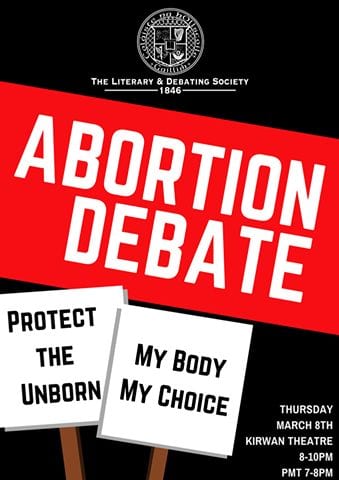 All those interested are welcome to come to the Kirwan Theatre Thusday at 8 p.m. to debate the motion, “This house would legalise abortion on request in the first 12 weeks of pregnancy”.

Professor John Morrison, head of obstetrics and gynaecology in NUIG, will give a factual presentation on the medical aspects of the issue without arguing for or against the motion.

As always, audience members will have the opportunity to participate in the debate and give speeches too.

The main debate will be preceded by Private Members’ Time from 7 p.m., when any member of the society may propose a motion for debate on whatever subject they wish.