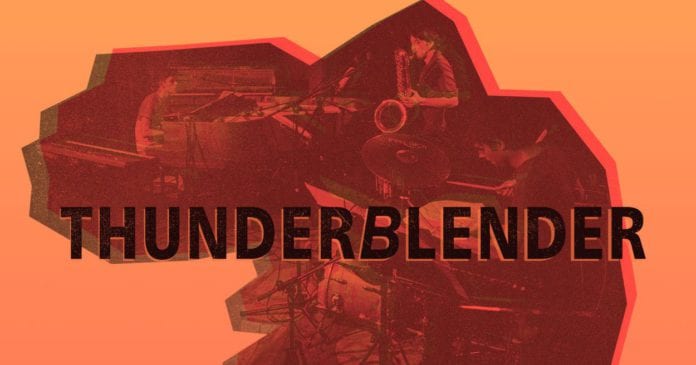 The award-winning Irish/Belgian trio are embarking on their first Irish tour and will be playing at the Black Gate, with support from Matthew Berrill and Aengus Hackett.

The trio move between order and chaos, surprising each other and audiences alike.

Check out https://samcomerford.com/thunderblender for more information, or listen to their debut album ‘Last Minute Panic’ here.

Led by Irish tenor and bass saxophonist Sam Comerford, with Belgians Hendrik Lasure (piano) and Jens Maurits Bouttery (drums, bass synth), Thunderblender is a jazz/improv trio from the heart of the Brussels scene.

In the past two years they have been making waves in Europe, playing in Belgium, the Netherlands and France, where they blew away the jury at the Concours Tremplin Jazz d’Avignon, awarding Comerford the prize for best soloist.

In October 2017 they released their debut EP, Last Minute Panic, on Honolulu records. Ian Patterson of All About Jazz said:

“Even in Thunderblender’s most intense improvisational flights there’s an abiding sense of the three musicians locked on the same intuitive wavelength, whereby freedom and control are but two sides of the same coin. Gutsy yet melodic, rhythmically complex yet grooving, there’s plenty to admire in this fine debut.”

Building on this success in Europe, they will embark upon their first tour of Ireland in March 2018, supported by the Arts Council of Ireland’s touring award.