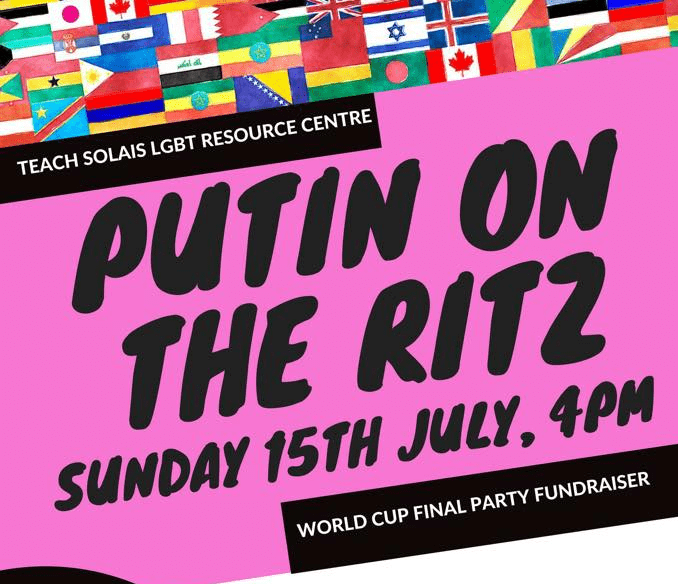 Amach LGBTQ Galway is inviting anyone interested down to Teach Solais on Merchant’s road for the 4pm kick-off for their ‘Putin on the Ritz’ world cup party.

In keeping with the spirit of the World Cup there’ll be a pool with a diving board.. nah I’m kidding. There’s going to be snacks from around the world, a world cup themed mocktail, and other games.

And the match. The final. Of the World Cup. You know the one.

Entry is free, but any donations given on the night will be passed to a Russian LGBTQ charity.

While Russia has presented a very welcoming and media friendly face to the world these last few weeks, it has incredibly restrictive laws on how LGBTQ people can live their lives.

Ostensibly to protect children from exposure to non-traditional values, Russia’s “gay propaganda” laws force LGBTQ people to hide their relationships and themselves from public view.

Beyond the law itself, LGBTQ people in Russia face homophobia, often violently expressed, in their daily lives.

Amach LGBTQ would like to show solidarity with the LGBTQ community in Russia by raising funds for local groups supporting them.