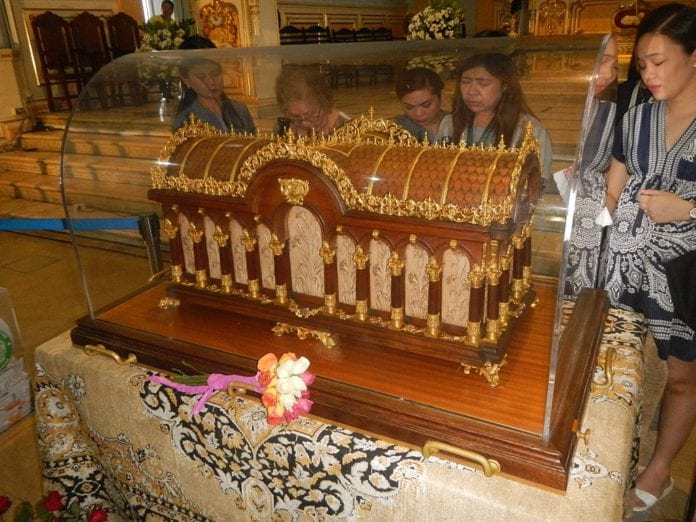 The relics of St Therese of Lisieux and her parents will come to Galway Cathedral on Thursday 16 August.

Currently at Knock, the saints’ relics are travelling throughout Ireland for the World Meeting of Families 2018 to enable people to personally venerate these 19th Century French saints.

Born Marie Francoise-Thérèse Martin in Alençon, France in 1873 – and known as ‘The Little Flower’ – Therese was one of the most popular saints in the history of the Catholic church.

She entered the Carmelite Monastery of Lisieux at the unusually young age of 15, taking the name Sister Thérèse of the Child Jesus, and later adding ‘and of the Holy Face’.

The young saint taught Carmelite novices the virtues of humility by word and example.

She became famous for her teachings on humility, written up as her ‘Little Way’.

The youngest child of Louis and Zélie Martin, whose relics are touring Ireland alongside those of their daughter, Therese died of tuberculosis at the age of 24.

She was canonized in 1925 with Pope Saint Pius X referring to her as ‘the greatest saint of modern times’.

St Therese was declared a Doctor of the Church by Pope John Paul II in 1997. She is also co-patroness of the Missions and secondary patron of France.

A mass and liturgy of welcome will take place at the Galway Cathedral at 11am, followed by veneration of the relics from 12 noon until 10pm.

On Friday 17 August a mass and ceremony of departure will take place at 7:30am before the relics are sent to three different churches in Loughrea.

They will move on to Limerick City on Saturday and then will be travelling around the east of Ireland before arriving at the Opening Ceremony in the R.D.S., Dublin, on Tuesday, August 21.

The relics will also be in the sanctuary in the Phoenix Park for the Papal Mass on Sunday, August 26.