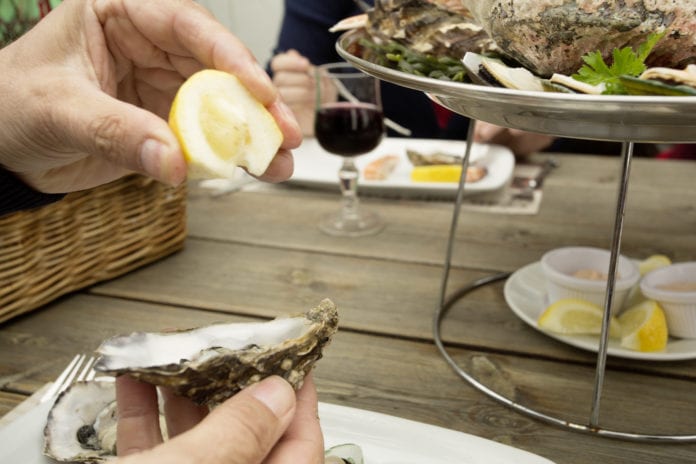 A celebration of Atlantic seafood will take place at Crinniú na mBád sailing festival in Kinvara this weekend to mark Galway as the European Region of Gastronomy 2018.

Kinvara community group Cuan Beo will have an eclectic lineup of seafood cooking demonstrations, expert talks from chefs, authors, and academics, and you know they’ll be giving out samples of chefs’ favourite dishes.

The events for the Region of Gastronomy are spread between the main stage, where festival goes can catch various talks, and the kitchen stage, where chefs from local restaurants and hotels will be giving cooking demos on their specialties.

The talks on the main stage will cover every topic to do with the sea including plastic pollution (Paul Connolly, Marine Institute), the seasonal movements of trout in the bay (Maurice Hannon, Interested Anglers Oranmore), and the heritage of marine communities on the Galway coast (John Bhaba Jeic O’Conghaile, Lettermullen Heritage Centre).

Programme Coordinator with Galway, European Region of Gastronomy Elaine Donoghue said, “Cuan Beo is working tirelessly to educate us all on the importance of our water quality,”

“And it is great to see the linkages with research and seafood-cooking taking place in a practical showcase at this long-standing festival.”

In the past Galway Hookers would carry turf from Connemara to Kinvara as the latter had no bogs to draw fuel from, and would return loaded with grain and produce.

These days, at Crinniú na mBád, these simple but majestic cargo boats fill the bay to commemorate the traditional commerce the existed between the areas.

There’ll be plenty of other sailing boats on the water, and one staple of Crinniú na mBád is the Climín.

A Climín is ‘raft’ made out of seaweed gathered and tied together in blocks to bring it back to shore.

Seaweed harvesting has long been a traditional industry along the west coast and still endures in Connemara to this day, though the traditional harvesters have come under threat from larger entities.

The Crinniú na mBád festival is on this weekend August 10 – 12. The cooking demonstrations and talks will begin every day at 12:30pm in the Cuan Beo marquee

As a certainly fancy sounding word, Gastronomy might call to mind either Michelin star chefs cooking tiny portions with prices that can be best measured in how-many-months-rent.

Or some Heston Blumenthal food-science/wizardry that requires liquid nitrogen and a centrifuge to make just the right kind of milkshake.

But what it really means is the connection between food and culture.

Galway and the entire west coast of Ireland has a rich history of fishing and marine food going as far back as there have been people here.

Every year the region produces enough food to feed one and a half million people.

The European Region of Gastronomy 2018 designation is a an opportunity to share the best seafood produced in Galway with tourists and other visitors from Europe and beyond.