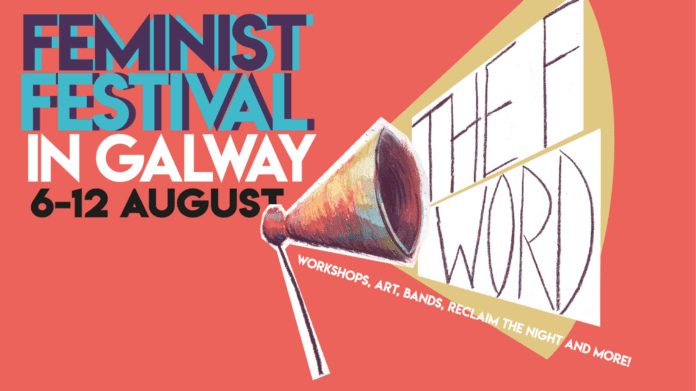 Galway’s third annual F Word festival kicked off this week in a climate of skyrocketing awareness of feminist issues – thanks in part to a successful campaign to Repeal the Eighth and the influential #MeToo movement.

The festival – organised by the grassroots group Galway Feminist Collective – launched on Wednesday with a bicycle maintenance workshop for women and non-binary folks.

Other diverse and wide-ranging activities this week included a storytelling night, an art exhibit and open mic, and a zine-making workshop.

Hougen-Eizman helped organise the festival along with other GFC members.

“We have a wide variety of events to sort of combine the different interests of our members,” she commented.

The focus is on intersectional feminism – which aims not just to advance women’s rights, but the rights of women of colour, immigrants, or gay, trans, or non-binary people as well.

The F Word continues this weekend with events such as tonight’s ‘Reclaim the Night’ march in Eyre Square to protest violence against women and LGBT people.

Organisers are expecting a good turnout, with people coming in from all over Ireland to march with drums, chants, and speakers from five different activist groups.

Saturday will see a whole day of talks and workshops on various topics such as climate change, trans rights, direct provision, and housing rights.

‘If you want something done then do it yourself,’ ACORN’s website states simply – a feeling that resonates with many in Ireland.

This comes in the midst of widespread frustration over government inaction on housing and the occupation of a vacant private residence in Dublin.

Finally, Sunday will include a more light-hearted programme of films by female directors and discussions on the massively successful Repeal campaign.

Said Hougen-Eizman: “The goal is to create more awareness of intersectional feminism and show that anyone can get involved – whether they’re interested in art, bicycles, whatever.”

To learn more about The F Word or the Galway Feminist Collective, check out their Facebook.