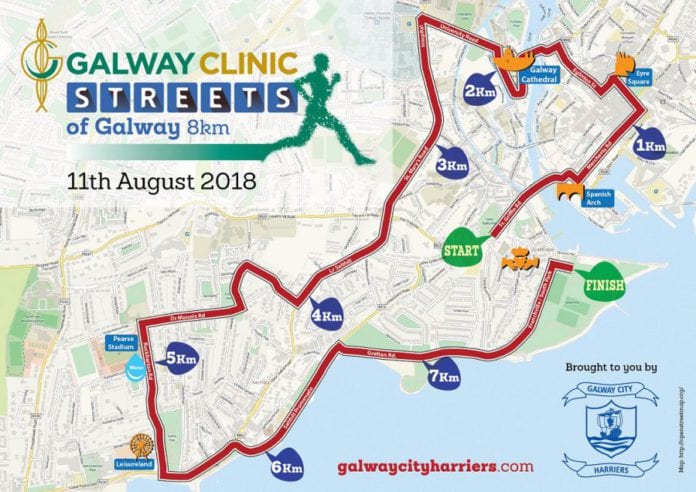 The Streets of Galway 8km run will be pounding through Galway’s thoroughfares tomorrow for the 33rd annual race through the city.

This year’s race is going to pack the streets to capacity with 3,250 people registered to run, the highest number that have ever taken part.

Organised by the Galway City Harriers Athletics Club, the Streets of Galway race has grown by huge leaps since it began 33 years ago, when only a few hundred people took part.

Now, says spokesperson for the Harriers David Glynn, it’s a major event in the city that people look forward to every year.

But there’s also a lot people that have trained hard to perform to their highest standard this Saturday, “Then of course you’ve got serious athletes as well, coming in at times like 24 minutes, ” David said.

At this very point in our conversation I could feel a strong urge to take a long, brisk walk along the Prom.

But this is a community event as well as a major race, with the Harriers and chief sponsor the Galway Clinic, encouraging people of all walks to get out, and get active.

In that spirit people taking part in the race this year have been encouraged to share training photos, and on race day tomorrow, using the hashtag #streetsofgalway to build up the hype and get everyone involved.

“Someone sees their friend is running, it might encourage them to do it as well,” David says, “So it’s just to build up a community spirit, that everyone is doing it.”

The encouragement really can really mean a lot to some of the people running, David says. A lot of people with the Harriers Fit4Life Adult training programme are taking part in the race tomorrow, and for some it’s a big leap.

“A lot of them, it’ll be the first race that they’ll be doing. So it’s really important for them to have encouragement from everyone.”

While some runners might put in that 24 minute time I’m still struggling to process, for others 8km is a big commitment.

Runners who’ve registered to race are collecting their race packs, with a numbered t-shirt and a timing chip so you don’t have to guess how you did, at Race HQ at the Claddagh Hall today and tomorrow morning.

Organisers have asked people to behave and show a bit of courtesy to the residents of the Claddagh who’ve let their neighbourhood be used as the hub of the race.

The race kicks off at 7pm sharp tomorrow at the Galway Technical Institute on Fr. Griffin road, with racers gathering at the starting line at 6:40pm.

On its path through the city, the route goes by some of the most iconic Galway sights: The Spanish Arch, Galway cathedral, and the NUI Galway campus.

Then back out towards Salthill past Pearse Stadium and along the Prom to finish up at the Claddagh.

Over 300 volunteers will be out on the night, working as marshals to direct runners and keep the track clear, or back organising things at Race HQ.

Prizes will be handed out at the Claddagh Hall at 8:30pm, and two winning photos using the #streetsofgalway tag will receive €50 vouchers for Elvery’s

Having gone on for so many years, the Streets of Galway Race has become a event that draws in spectators and participants from every part of the community.

Many local businesses will be joining in the run itself, with local employers like HP, Medtronic, and Boston Scientific fielding teams.

And the Galway Clinic will be fielding approximately 60 runners. They’ve said that they’re happy to be involved in something that encourages people to get in some healthy exercise.

While it’s mostly a local race, David says they have about 400 runners coming from Dublin, 100 or so from Cork, and one or two coming over from the UK.

Many people will also use the race as a chance to raise money for charity.

Whether it’s teams from Croi, COPE, or ACT Meningitis who’ve all run in past races to raise money and awareness for their causes.

Or just your own private fundraiser for a cause you believe in, all who’re willing to run are welcome.

David’s pleased to talk about how the race has become a big draw for the crowds in Galway, “We go right through the city so it gets people out from the hotels in Eyre square, all the businesses along the route.”

“There’s a lot of tourists as well at this time. So we encourage them to come out and support it as well.”

If you want to support the Galway City Harriers and Galway Clinic Streets of Galway 8km run, you’ll catch them on the streets tomorrow from 7pm.