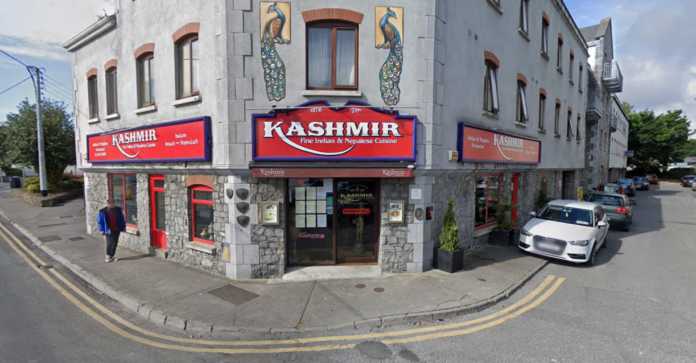 A restaurant waiter not only stole a bank card from a customer, but returned to burglarise the restaurant where he had been employed on multiple occasions.

Zakir Hossain (31), of Dun Oda, Munster Avenue in Galway City, pleaded guilty to multiple counts of burglary at the restaurant where he had once been employed, as well as to stealing from a customer.

On February 28 of 2019 a customer entered the restaurant and used her Ulster Bank debit card to pay for her meal.

A male server, Hossain, was captured on CCTV taking her card after she paid. He then went to Ceasar’s Palace Casino in Salthill later that day and took out €1,800 over the course of four separate transactions.

The burglary offences originated from July 7 of 2019. The restaurant owner locked up Kashmir at 11:30pm and went home.

A review of CCTV footage from the restaurant showed that he had also burglarised the restaurant on June 28, as well as July 2 and 3, taking cash from the tills each time.

The total amount stolen from the restaurant came to €1,860 over the course of the burglaries.

In a written victim impact statement which was handed into the judge, the woman who had her card stolen said that she now feels “vulnerable and suspicious” during all transactions.

The owner of Kashmir told the District Court that this has had a serious impact on his business, with extremely negative reviews posted online.

People have thought that the restaurant was in on the theft he added.

Beyond the professional realm, this has also affected his personal life. Hossain made copies of all of his key he said, not just for the restaurant, but for his home as well.

Solicitor Brian Gilmartin, defending, acknowledged that what Hossain did was a “complete and utter breach of trust” towards his employer.

Judge Fahy said that the actual physical loss of monies experienced by the owner of the restaurant was a “drop in the ocean” compared to the goodwill destroyed after years of work.

The defence had €2,000 in compensation to offer the restaurant owner for his losses, the €1,500 which was lodged for bail, and €500 more in court. But Judge Fahy said that Hossain would still be receiving a prison sentence.

“This man has to start all over again. The goodwill this man built up. That is now gone.”

Judge Fahy imposed six months in prison for the burglary charge with the highest financial loss, where Hossain took approximately €600 in a single night.

She further handed down a six month consecutive sentence for the theft of the bank card, for a total of one year in prison.

Each of the other burglary charges, and attempting to withdraw money using the stolen card, attracted a six month concurrent sentence.