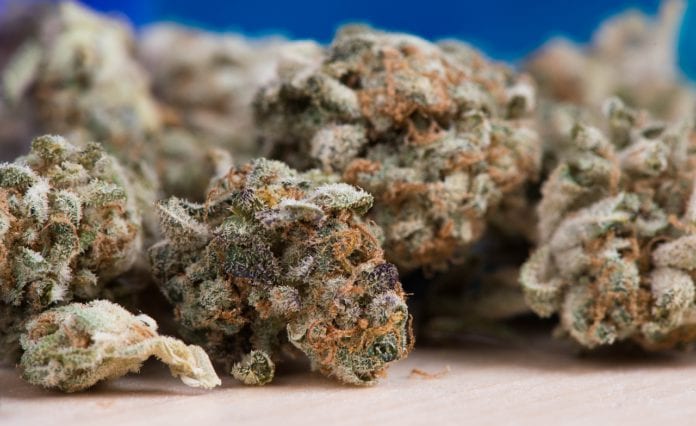 A man who was caught acting as a drug courier within two weeks of getting a suspended sentence for a similar offence has been jailed for four years.

Marius Miskiewicz, with an address at Rosewood Cottage in Ardrahan, was caught by gardaí acting as a drug courier in 2015 after being given a four year suspended sentence for a similar offence not long before.

Garda Barry Nugent said that on March 16 of 2015 he was in a patrol car at Liosbain Business Park when they observed a car acting suspiciously.

After stopping the car and speaking with the driver, Marius Miskiewicz, he gave them a quantity of cannabis he had up front, four phones, a digital scales, and €515 in cash.

When he was questioned at the station he informed gardaí there was an even larger amount of cannabis in the bonnet of the car.

Gardaí interviewed him twice, during the course of which he said that he was acting as a courier for the drugs.

In total gardaí recovered just under 1.5 kilos of cannabis, for which they gave a market value of €29,864.

Less than two weeks before this, on March 5, Mr Miskiewicz had received a four year suspended sentence at Galway Circuit Court for possessing €6,353 of cannabis with the intent to sell or supply.

On October 8, 2015 he pleaded guilty to a further charge of possessing drugs with the intent to sell or supply them, and at the same hearing the state applied to reactivate the four year suspended sentence.

But after making bail he failed to appear at his sentencing hearing next month having left the jurisdiction, and a bench warrant was issued for his arrest.

He didn’t return to the Galway area until March of last year, when he was picked up by gardaí and has been in custody since that time.

Mr Miskiewicz’s barrister said that his client, who is a Polish national, came to Ireland 15 years ago and for most of his time here was a productive member of society working as an electrician.

But in 2013 he developed a very heavy amphetamine habit, and ended up becoming a drug courier in order to feed his addiction.

Garda Nugent agreed with the defence’s assertion that Miskiewicz was a somewhat vulnerable person who had been taken advantage of due to his addiction.

The Garda also acknowledged that he was cooperative in telling them about the drugs under the bonnet of the car, saying “we would have found them anyways, but he did tell us they were there.”

Since he has been in custody Miskiewicz has been taking steps to deal with his addiction, the barrister said, and he intends to return to Poland after serving his sentencing.

Appealing for leniency the barrister added “He wasn’t making it, he was doing it to feed a habit, and he was no more than a delivery man”.

Judge Rory McCabe said that it is “considerably aggravating” that Miskiewicz was caught re-offending within a fortnight of receiving a suspended sentence for a similar offence.

For the new charge involving €29,864 of cannabis, Judge McCabe imposed a four year prison sentence, and suspended the final year of it for three years.

Of the four year suspended sentence, the judge reactivate one year, which will be served consecutively to the other prison term. Credit was given for the time served since he went into custody last March.