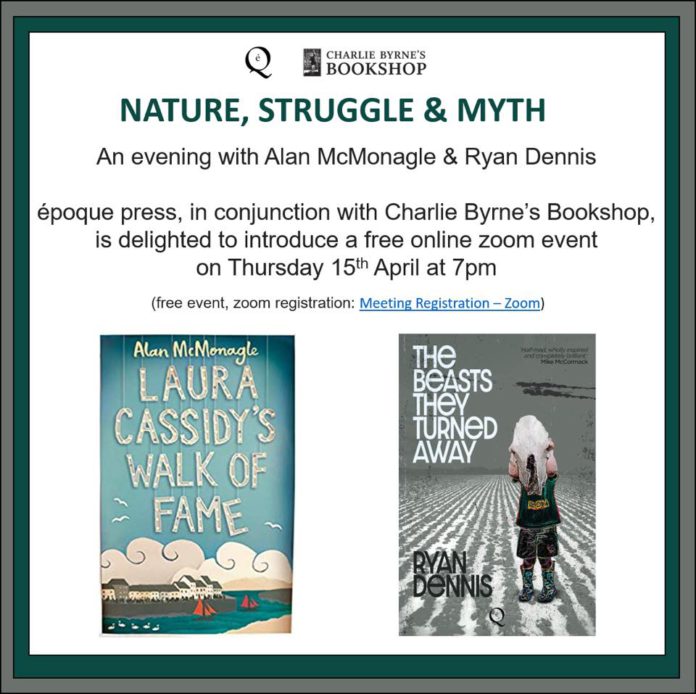 Local authors Ryan Dennis and Alan McMonagle are holding an online event next week together with Charlie Byrne’s Bookshop.

The event, titled Nature, Struggle and Myth: An Evening with Galway Writers Alan McMonagle and Ryan Dennis, will take place virtually on Thursday April 15 at 7pm.

The two writers will talk about their latest novels, the inspiration behind them, and the role that forces such as nature and myth have within each story.

Ryan Dennis is a former Fulbright Scholar in Creative Writing and has taught writing at several universities.

In March 2021 he published his debut novel The Beasts They Turned Away with époque press, which received a number of glowing reviews.

The Irish Times called the novel a “demanding debut, dense and dark, but ultimately rewarding in its strange beauty.”

Alan McMonagle holds an MA in Writing from NUI Galway and has received many awards for his work.

In November 2015 he signed a two-book deal with PICADOR and his first novel, Ithaca, was published in March, 2017. Ithaca was nominated for the Desmond Elliott Prize for first novels, the International Dublin Literary Award and an Irish Book Award.
His latest novel, Laura Cassidy’s Walk of Fame was published in 2020.

People can register for the free zoom event HERE.

The Beasts they Turned Away is available HERE.