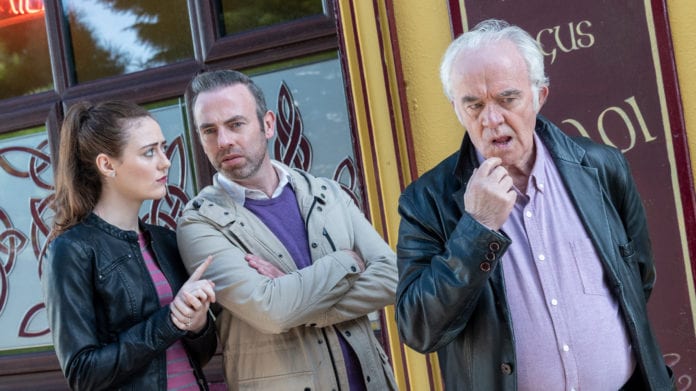 Intrigue and drama continue this Thursday on Ros na Rún as Bobbi Lee and Berni fall out over her letter, Tadhg and Padraig are headed to court, love’s labours are lost for Michelle, and Caitríona faces financial woes.

Tuesday’s episode of Ros na Rún saw Berni make a fateful decision to withhold a letter about Bobbi Lee’s son’s adoption from her.

Bobbi Lee is furious at this seeming betrayal, but Berni is adamant that it’s for the best to protect the boy from Andy, but will Bobbi Lee listen to his advice against making contact.

Padraig, with Dee egging him on, plans to take Tadhg to court for unfair dismissal. But does the long arm of the law spell trouble for the resident schemer, or does he have something up his sleeve.

Michelle is hopeful that here date with Rory could lead to a renewal of romance in her life, but Sorcha quashes any such notions for her once again.

Meanwhile Caitríona faces some minor embarrassment when her card is declined in a café, but it quickly becomes clear that this is just a symptom of a much bigger problem.

Watch as embarrassment turns to shock as she discovers just how deep in the red her accounts are, and tries to figure out what to do.

Catch Ros na Rún this Thurday at 8:30pm on TG4, with a double episode omnibus on Sunday for those who want to catch up on both of the week’s episode.