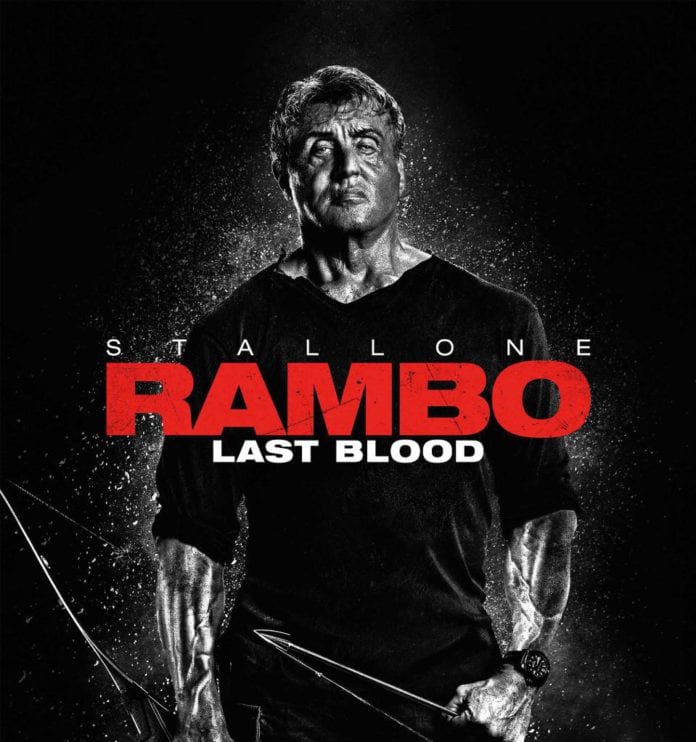 All of the Rambo franchise – except, perhaps, the sombre and morally complex first film – have been, in many ways, reprehensible.

They’ve been ludicrously violent and unspeakably dumb revisionist nonsense. But they’ve also been tremendously over the top cheesy fun.

The previous entry in the series appeared to be the final word in our titular hero’s globe-trotting adventures in ultra-violence. There was certainly a sense that it couldn’t be topped in its unhinged brutality: it felt like a fittingingly blood drenched end for the character.

But here we are in 2019 – and there’s a new Rambo film out on release, perhaps disingenuously entitled Last Blood. Who are they kidding?… We all know the man can’t be stopped.

The film begins with our title hero enjoying some well-earned retirement in Arizona after many decades of low-key genocide. His only companions are his housekeeper of sorts, Maria (Adriana Barraza), and her teenage granddaughter Gabrielle (Yvette Monreal).

Things seem to be going well for all concerned. Rambo rides horses throughout the days and makes sure to stay ultra-manly and buff by doing a bit of blacksmithing when he’s winding down at night.

Unfortunately, the peace and calm of the situation gets a bit of a jolt when Gabrielle announces that she wants to head down to Mexico before she starts college, in order to track down her deadbeat Dad and ask him why exactly he abandoned her as a child.

As a result, a wafer-thin plot of revenge is set in motion, in which Rambo must face-off against a succession of Mexican stereotypes before a final predictably bloody showdown.

This film is dumb, there’s no denying it. The first two acts of the film are basically Taken, but with a harder edge and even dodgier politics: it’s fair to guess that the film wasn’t part-financed by the Mexican tourist board.

The final act is an extremely violent variation on the basic plot of Home Alone, with Rambo defending his homestead, aggressively, against a succession of faceless bad hombres. There isn’t much here in the way of originality.

It wouldn’t be totally uncharitable to call long portions of this this film a bit leggy and the story would have fit quite comfortably on the back of a postage stamp, with plenty of room leftover to spare.

But I got a certain amount of enjoyment from watching Stallone’s performance, mainly because of him just looking so spectacularly weird at all times.

The man is 73 and manages to appear both terrible and fantastic for his age. I know it’s a cheap shot to critique an actor’s appearance, but Stallone spends so much time on screen here and the cornerstone of the movie’s suspension of disbelief requires you to buy the idea of this aged leathery man as a plausible action star.

Given the threadbare nature of the plot that’s pretty much all there is holding the film together for long stretches, so it’s very hard not to think about that question.

He has the rheumy eyes and lined face of a pensioner, but the veins that run up and down his arms like Himalayan ridges suggest that he’d still be able to rip your throat out with next to no effort at all.

Despite all of the other issues it has, the film delivers what it promises in the final third. If you buy a ticket for this movie you know what to expect: over the top graphic violence. And on that front, after a slow start, it really becomes a bloodbath on the home straight.

While the quantity of OTT action isn’t a match compared to the death-orgy of the previous film, the quality – including already mangled corpses being peppered with additional lead seasoning post-mortem, heads being vapourised by point-blank shotgun blasts, hearts being literally ripped from chests – is highly satisfying.

Is it big or clever? No, absolutely not. Did I enjoy every moment of the on-screen carnage? Yes, yes I did.

Which means I must, in all honesty, give the film a thumbs-up. It’s not a resounding endorsement by any means, I feel vaguely unclean even half-heartedly giving it a pass.

The plot and characterisation is awful and basic, its themes are regressive and barbarian. But I don’t think much of that is even relevant when it comes to assessing the quality of a film like Last Blood.

Everyone going to see it wants bang for their buck and it, eventually, meets those, admittedly low, expectations. It achieves what it sets out to do, by delivering an old-school no-frills action movie.

A lot of films trip up these days on their promises and un-met expectations, so I have to give Last Blood a tiny bit of respect for being honest about not even bothering, but somehow still doing enough.