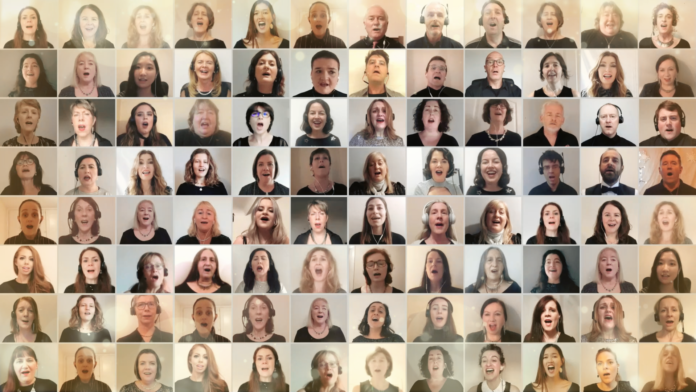 The GMIT choir released their latest virtual hit over Christmas, with a rendition of ‘O Holy Night’ dedicated to the memory of a late colleague.

The video brings together over 70 staff and student voices in this beautiful hymnal arrangement, showing the choristers dressed in black & silver interspersed with clips of members with their families and friends preparing for the festivities.

The production has been dedicated to the memory of the much loved colleague and chorister at GMIT Trish Carrick, who passed away in November due to cervical cancer.

Musical Director Seán Rowland says “It had been the choir’s intention to dedicate this song to Trish while she was unwell, but now instead it has been dedicated to her memory.”

“We would ask you to consider making a donation to Galway Hospice who took such good care of Trish and were a support to her family during her final weeks.”

This is the fifth release from the GMIT virtual choir since the start of lockdown, with the dozens of performers recording their individual pieces at home, and sending them in to Seán Rowland to mix together.

Just last month, students recorded the Avicii hit single “Hey Brother” which marked the Class of 2020’s Virtual Conferrings, and which has been viewed over 100,000 times.

Seán Rowland said “‘O Holy Night’ is one of my all-time favourite Christmas Carols and the staff and students have performed this beautiful piece incredibly well.

Despite working from home, Rowland said that he has never felt as close to the choir as he he did when producing this video, getting to hear “both individually and collectively” the effort that everyone put in.

Anita Mahony, Co-Chair of GMIT Healthy Campus, said “This new release is beautiful and very moving to us as we think of Trish who, long before our choir was established, used to sing at remembrances services for late staff and students, and at our annual Ash Wednesday masses. She will be deeply missed”.

“I’d like to thank our amazing Choir Director Seán Rowland who has given so generously of his time and talents this past year, uplifting us all during the lockdowns.”