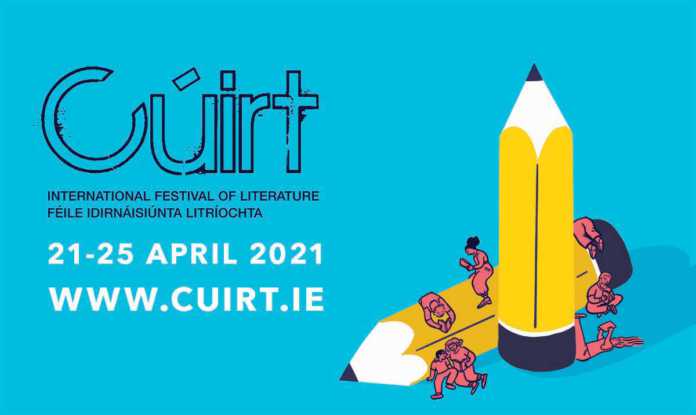 Cúirt International Literature Festival is looking ahead to a year that will hopefully be more back to normal, announcing dates for the 2021 festival in Galway.

Next year will see Cúirt return to more in person events when it takes place between Wednesday 21 and Sunday 25 April.

Despite being in the height of the coronavirus pandemic, this year’s literature festival went ahead in April with an online format that allowed Cúirt to reach a whole new audience.

The live events were viewed by almost 4,000 people on multiple continents during the festival itself, and in the months since then they have racked up more than 25,000 views online.

Speaking about the 2021 edition, Director of Cúirt Sasha de Buyl said that they were “blown away” by the response to the online festival this year.

Writers and audiences alike had a very warm reaction to the virtual festival she said, and they were delighted to help in “bringing books and words to readers” during a challenging year.

“Having said that, we couldn’t be more excited to bring Cúirt back to the streets and venues of Galway, a character that has been sorely missing from our story, in 2021.”

The 2021 programme will deliver a hybrid programme of events, mixing in-person events with an online programme. Cúirt Festival has already shown how it can adapt to deliver high-quality events to the public with restrictions in place.

Organisers will be following government advice closely to deliver a festival that is safe and accessible for both the audience and participants. The full programme will be announced in early March 2021.

Founded in 1985, Cúirt International Festival of Literature is one of the oldest and most recognised literature festivals in Europe.

Over the past three decades, Cúirt has hosted Nobel prize-winners, Poet Laureates and prize-winning authors from around the world.

The Festival is supported by the Arts Council, Creative Europe, and Galway City and County Councils

Along with the dates for next year, Cúirt has also announced a new commission in partnership with the National Library of Ireland.

In 2021, award-winning poet Seán Hewitt will be appointed as the first-ever poet in residence at the Irish Queer Archive in the National Library.

This project, which will be launched at Cúirt 2021, is meant to showcase the rich history of LGBTQ+ communities in Ireland, and to help support new work from queer writers.

“The archive is not a silent place. It’s full of voices, all of them vital, which deserve to be heard, and to be attended to,” Seán said.

It’s an honour for a poet to be given the opportunity to spend time amongst other voices, listening, and asking questions.

The archive is not a silent place, but it is full of those who have been silenced. I hope to give them the space of a new form, a new cadence, to invite them to sing through me.”