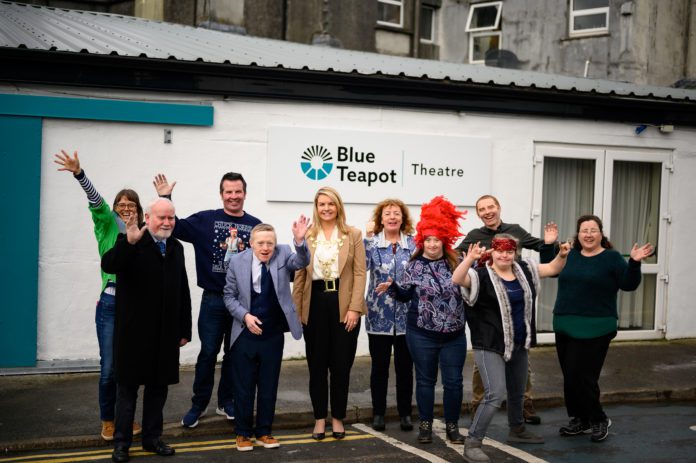 The Blue Teapot Theatre Company have gotten a shot in the arm to improve their recently purchased premises in the westend.

Back in October, Blue Teapot became the proud owners of the premises on Munster Avenue that they have inhabited since 2008.

Mayor of Galway, Cllr Clodagh Higgins along with a nine pact of Councillors that determines the budget in Galway City Council made a presentation to Blue Teapot Company in late November.

The request for funding to the Councillors was for the renovation of aspects of the newly purchased building to bring it up to standard in terms of accessibility and service provision for intellectually disabled artists.

“We are thrilled to have a permanent home in the heart of this very special neighbourhood in Galway City and this funding allocation will go towards getting us set up in our new home,” explained Petal Pilley, Creative Director of Blue Teapot.

Owning this space offers the company the potential to contribute to the cultural life of Galway and the Western Region through the provision of a new arts and disability centre.

They envision it as a hub and centre of excellence for ID theatre arts, and propose to develop in line with international best practice models.

Blue Teapot has worked consistently to radically transform theatre practices by telling stories through the lens of disability and pave the way for inclusive practices to become the norm.

Particular focus is given to how the company is positioned today at local, national and international levels.

Commenting on the budget allocation, Cllr Higgins commented, “We recognise and appreciate the valuable work you do in our community, and we would like to wish you every good luck with your future plans for the building.”