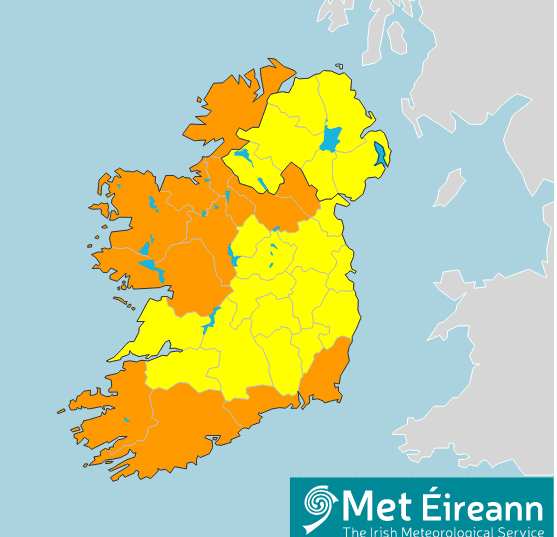 A Status Orange weather warning has been issued for Galway as Storm Francis is expected to hammer the west coast tonight and Tuesday, in the second named storm within a week.

Met Eireann is warning that “intense rainfall” is expected at time on Monday night and through Tuesday due to Storm Francis.

Accumulations of 40mm to 60mm of rain are expected, possibly more in mountainous areas, with the worst of the rain expected on Tuesday morning off the south coast.

Some flash flooding is likely, and Met Eireann has also cautioned that rainfall will further elevate river levels and may result in river flooding.

The Status Orange weather warning will come into force at 9pm on Monday night, and remain in place until 5pm on Tuesday.

It covers all of Connacht, along with counties Cavan, Monaghan, Donegal, Wexford, Cork, Kerry and Waterford.

The rainfall warning for Dublin, Carlow, Kildare, Kilkenny, Laois, Longford, Louth, Wicklow, Offaly, Westmeath, Meath, Clare, Limerick and Tipperary will be in force from 9pm tonight until 9pm on Tuesday.

The wind warning states that “very windy or stormy” conditions are expected on Tuesday in Munster, Dublin, Wexford and Wicklow as Storm Francis moves across the country.

Winds of 55-65km/hr are expected from 6am to 7pm on Tuesday, with gusts reaching up to 110km/hr, and possibly higher in exposed areas.

Storm Francis is the second named storm to hit Galway in the past week, after Ellen caused widespread damage across the county on Wednesday, with power outages and water disruptions lasting for several days.

Met Éireann has issued a weather advisory today, alerting the public that a period of wintry weather is headed our way.The forecast for the...
Read more
NEWS

Funding for new toilet with greater disability access in Salthill

The inclusion of funding in the city council's budget for a new toilet facility in Salthill which designed with greater accessibility for people with...
Read more
Facebook
Twitter
Pinterest
WhatsApp

When picking a family home to settle down in long term, some of the most sought after features in a house are lots of...
Read more