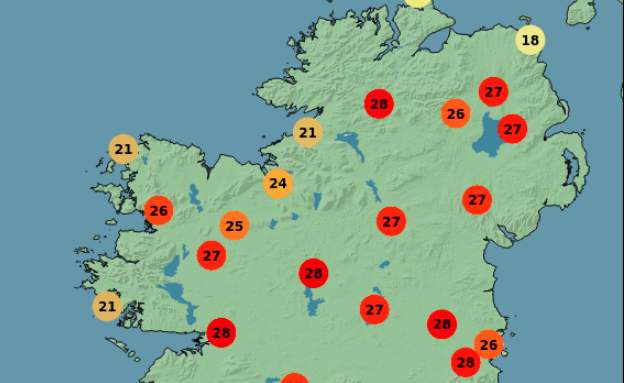 Met Éireann has issued a weather advisory as daytime temperatures are set to remain in the mid to high twenties across Ireland this week.

The weather alert covers all counties in the Republic, and will expire on Friday at midday.

Met Éireann says that it will also be very humid at night, with temperatures staying in the mid to high teens.

Afternoon temperatures in most parts of Galway will remain around 26 or 27 degrees until Friday, with a great deal of sunshine to accompany the heat.

The hottest temperatures in Ireland so far this year were measured in Galway on Saturday afternoon, as many people flocked to bars and beaches to make the most of the summer weather.

Athenry recorded a blistering 29.5 degrees at 4pm on Saturday, while coastal areas in Connemara had temperatures in the early twenties.

People are being urged to be ‘sun smart’, as UV levels will be high over the coming days.