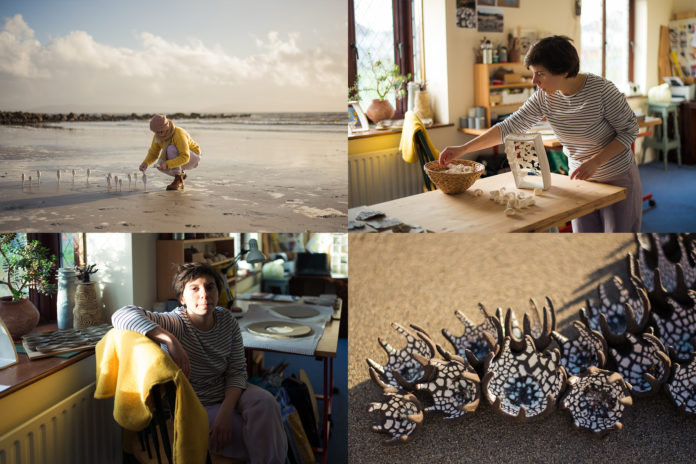 Tatiana Dobos was born in Moldova in 1982, and studied until she was 27 when she then accidentally discovered clay while doing sculpture in an art studio.

She quit her job, erased everything she had studied and began her journey with clay, which has been a constant learning and discovering process ever since.

Tatiana came to Ireland in 2010, and she says that Galway immediately felt like home.

“Ten years later, I can say that Galway is the true and only home to me. My studio is located in Knocknacarra, very close to the sea where I cycle almost every day for refreshing swims, and also close to Barna Woods, a place for reflection and reconnection,” she says

“It feels really inspiring to be so close to Connemara and Burren, places that invite to rediscovering oneself.”

From her little studio nestled in the west of Ireland, Tatiana Dobos creates ceramic artworks inspired by human emotions.

Tatiana seeks to materialize in her works the mechanisms of the inner battles, at the same time exploring the anatomy of the aftermath.

“There is a correlation between sentiments, shapes and colours” she adds.

“I believe that balance and fulfilment bring to life circular and smooth shapes, while negative emotions translate into sharp structures.”

Always observant of the organic textures and forms, Tatiana looks to create objects in complete harmony with the natural environment, where recurring clay elements represent the process of examining emotion.

Using some of the most common types of clay like porcelain and stoneware and a traditional hand-building technique, she expresses her sensibility to simplicity and permanence.

The Samhlú Croí Cruthaitheach films are produced by Galway based Heavy Man Films. Specialising in bespoke storytelling, the company has grown from strength to strength over the last decade.

Tatiana’s film is available to watch on the TG4 player at https://www.tg4.ie/Samhlú