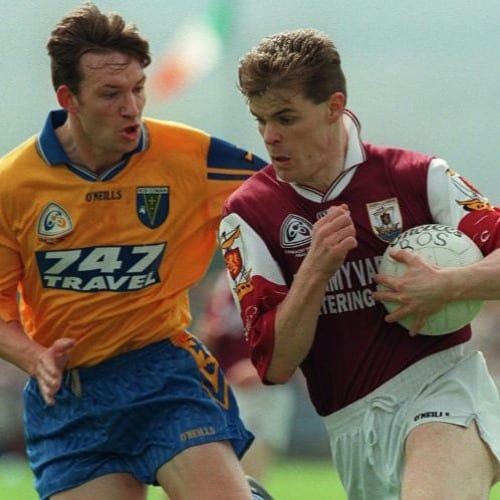 GALWAY GAA: It’s ’20 Years Since Sunday’ but before Ray Silke got to walk up the steps of the Hogan Stand and lift the Sam Maguire Cup after Galway’s 1-14 to 1-10 victory over Kildare in Croke Park, the Tribesmen had to overcome numerous obstacles to take their place in the decider.

They overturned defending Connacht champions Mayo in Castlebar and brushed aside Leitrim in Carrick-on-Shannon.  While Derry’s challenge wilted in the All-Ireland semi-final.  But to emerge from their province, they endured two tough clashes against Roscommon that could have derailed their campaign.

Indeed, Niall Finnegan needed an equalising kick in the drawn at Tuam Stadium to ensure John O’Mahony’s men got another crack.  And the replay in Dr. Hyde Park on August 2nd needed extra-time to be decided.

Michael Donnellan capitalised on a defensive error to get the crucial goal as Galway emerged 1-17 to 0-17 winners and the rest is history.  Donnellan finished with 1-3, Ja Fallon got five points, Derek Savage scored three, while Sean Og De Paor and Niall Finnegan also kicked a brace each.