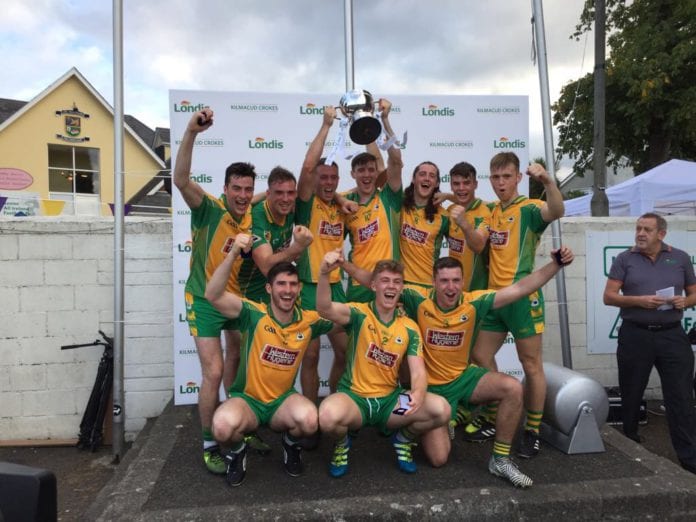 Our final major of the year took place on Sunday with our Vice Presidents Prize (Sr. Agnes Curley).

Seniors were beaten well by Pearses at the weekend by 2-19 to 0-11. Abbey never looked in control against stronger opponents and now have Ardrahan and Athenry left in the group. Two wins are a must to still qualify from group.

U15 championship this Thursday away to Pearses also.

The celebration evening for Feile winners in hurling/camogie/ handball which was to be held this Sunday 9th September has been postponed to a later date.

We had a fantastic days hurling at the pitch today with an U11 friendly blitz with two teams from Clare, Parteen and St. Joseph’s  Doora- Barefield and two Galway teams, Sarsfields and ourselves.

Kevin Mannion Parteen, ex Abbey, had grandsons or connections on all teams and it was great connection to have and a great way to get clubs together.

All teams got 3 games each but the standard of hurling and the level of skill on display was magical to all who came along to witness it. With sons of the great Joe Cooney, Peter Cooney, Seánie McMahon and Christy O’Connor playing you wouldn’t expect anything else.

It was a friendly blitz but no team or player held back and they all gave it everything and played the game to the best of their ability and at the end of the day there wasn’t a puck of a ball between all four teams but everyone walked away with a shake hands and well done.

Sincere thanks to all management for the manner of professionalism and respect shown to all teams.

Massive thanks to our local refs who never let us down namely David Staunton and Mike Tarpey.

After the games it was back to the Abbey Inn where all players and management enjoy a chat over a chicken curry and rice. Thanks as always to Delicious Catering for the fabulous food and to Paddy Mannion Abbey Inn for hosting us.

All players were also presented with participation medals and a goodie bag by Kevin Mannion.

Thanks as always to Abbey HC for support and it is hoped that one of the Clare clubs will host this tournament next year and it will continue to rotate between the 4 clubs over the coming years.

Thanks to all for supporting us in our lotto.

Play online at: www.abbeyknockmoy.gaa.ie/club-lotto
You can purchase 10, 25 or 52 draws.

€2 per line or 3 for €5 in normal envelopes in the various pubs and shops in the parish.

Corofin added the All-Ireland Sevens football title to their All-Ireland club crown when they overcame seven times champions St. Gall’s of Antrim in the final at the Kilmacud Crokes grounds in Glenalbyn on Saturday evening. This was the Clubs fourth success in the tournament.

Congrats to the panel of players and mentors on this super achievement and to the Londis Player of the Tournament, Dylan McHugh.

There was no luck for the Galway minors as they lost out to Kerry by 1-14 to 0-21 in the All-Ireland final. Well done to Tony Gill (1 goal), Matthew Cooley (5 points), substitute Conor Halbard and panel member Rob Carr on their involvement all year.

Our minors played Claregalway in the Minor Championship North A, Group A on Tuesday evening in Claregalway.

We play Glinsk in the Junior A Championship semi-final in Barnaderg at 6.00 pm on Saturday evening.

We play Annaghdown in the Junior C Championship North in Corofin at 12.00 pm on Sunday afternoon.

We hosted the inaugural Under 12 Corofin James Collins Invitational Tournament on Saturday.

This is the largest U12 tournament that we have ever hosted with 24 teams from across 9 Clubs competing across 3 competitions.

A staggering 45 matches were played throughout the day with excellent skills and super football on display.

There were 3 competitions to suit all levels of skills and all teams were very competitive.

Crossmolina and St. Mary’s of Leitrim competed the Cup final where they served up a great display of football where Crossmolina won out.

In the Shield competition, Milltown and the Corofin B team reached the final. This was a very competitive affair with Milltown coming out on top.

In the Plate competition the 2 teams to reach the final were St. Mary’s of Leitrim and the Corofin Green team. Again, there was another great display from both teams where Corofin won out in the end.

Overall, football was the real winner, as all the children got loads of playing time and it was an very enjoyable tournament.

We would like to send thanks to all of the club’s for attending and making this tournament a success.

We would also like to thank all the volunteers for helping to setup and run the tournament as without them this would not of happened. We cannot name you all but special thanks to Frank Morris for his guidance and support, the Corofin Bord na Óg, the Collins family and Club Secretary, Jimmy McHugh from. Also a very special thanks to Liam Cawley for the planning and overall cordination of the event.

The 1st of September proved to be a great day for the Club with the success of the under 12 tournament and an All Ireland 7’s Kilmacud title for our Seniors.

Good luck to our U10 girls who play the County blitz on Saturday next in Clonberne.

Our u16 ladies await confirmation of fixture for their Shield semi-final. More information to follow when it comes available.

Best of luck to our Minors and management who face Corofin on Saturday at 4pm in Caltra in the Shield final.

Cash for clobber collection continues at the dressing rooms to raise much needed funds for the ladies club.  Please leave bags of unwanted clothing/sheets/ towels. No duvets please.