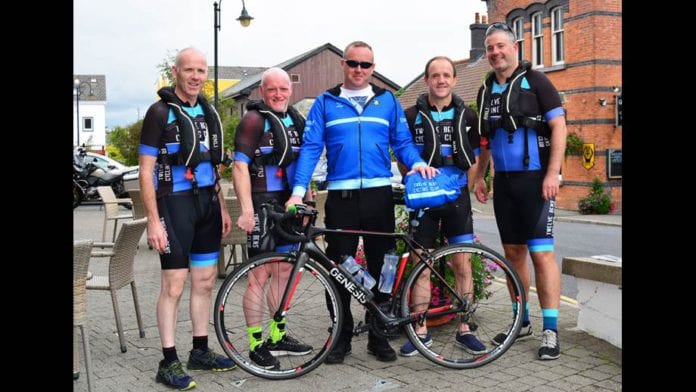 Four friends will be cycling 310km from Dublin to Clifden in a single day to raise money for the Royal National Lifeboat Institute.

The foursome will set off from the Swords RNLI station on the morning of Sunday, September 16 and follow the sun west through the day, ending at the Clifden RNLI station.

Along the way they will wrestle a bull, fight Midlanders, ford the Shannon on their bikes, and solve a deadly riddle from the ghost of Seamus Heaney.

Nah, but they will be wearing lifejackets for the entire trip to raise awareness of water safety.

Rob King said, “Since we all share a common interest in cycling with our local clubs we thought it would be a good idea to undertake a trip like this raising funds but also to raise awareness around water safety at the same time.

“We feel that since lifejackets are so compact nowadays that this exercise will highlight how easy it is to wear one. Our basic message is ‘If we can wear one, so can you’.”

The RNLI is a rescue charity that saves lives at sea across Britain and Ireland, providing 24/7 coverage from 238 lifeboat stations.

As a volunteer organisation it relies on public donations to continue its work alongside the Coast Guard and other rescue organisations.

The 2018 Clifden Lifejacket Cycling Challenge has a fundraising goal of €3,000. If you’d like to support this worthy cause, a page has been set up for donations here.

Since it was founded in 1984, RNLI lifeguards and lifeboat crews have saved at least 140,000 lives.

The organisation is made up of 95% volunteers, including 4,600 volunteer lifeboat crew members and 3,000 volunteer shore crew.

Many, many more volunteers works to raise funds, spread awareness of the group, and advise people on water safety.