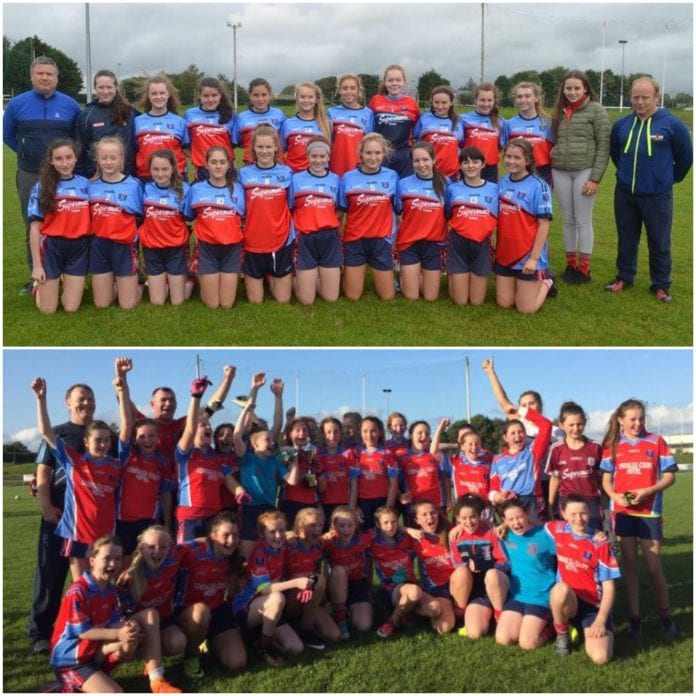 A huge well done to the Tuam-Cortoon U12s who won the league final last weekend, beating Caltra Cuans on a final score line of Tuam-Cortoon 3-14, Caltra 5-6. It was a beautiful day for football in Clonberne, with ideal weather conditions.

Led by captain Keelin Clune, Tuam-Cortoon started very strongly with an early goal by Keelin herself. There were stellar performances all over the pitch from backs such as Katy Connern, Ayla Whelan and Danielle Fitzpatrick and forwards such as Éabha Smith, Aoife Tuck and Rebecca Coyne.

Sarah Banks and Keelin Clune played central roles in most of the attacks, feeding in quality ball from midfield to the forwards. Holly Williams put in a tigerish performance and gave the Caltra forwards a very hard time. At half time, Tuam-Cortoon led by 6 points but the game was by no means over.

Caltra were a very strong side and mounted a serious comeback in the second half, scoring a couple of goals in quick succession. Caoimhe Ansbro made a fantastic save in the goal mouth in the dying minutes, which proved invaluable in the narrow two-point victory.

Every single girl gave it her all on the day and left nothing on the pitch. They are a credit to themselves, their parents and their coaches. Well done also to the management, which is made up of manager Donall Casserly and coaches Padraic Creaven, Eleanor Donnellan, Peter Tuck and Jacinta Melia.

Thank you to Supermacs, Tuam, for feeding the girls after the game.

On August 26th, the Tuam-Cortoon U16 team lined out to play Ballinasloe in their county championship final. The morning was wet but it by no means dampened the girls’ spirits. The rain subsided just before kick-off but conditions were slippy .

Tuam-Cortoon’s first attack of the game ended up with a goal and things were looking good from the offset. Ballinasloe however kept working away with a strong wind behind them and soon got on the score board themselves, notching up a couple of points.

The ball changed hands a lot but Tuam-Cortoon made the most of possession and at half time led by 2 points. With inspirational words from captain Jennifer Leufer and manager Damien Hesslin at half time, the girls came out for the second half full of spirit and hope that they could see out the game.

The girls really upped their performance, while Ballinasloe threw everything at them. The game went through a very physical patch as both teams didn’t want to give an inch. With less than a minute to go in the game, Tuam-Cortoon won a free 14 metres out from goal.

With the last kick in her last game as an underage player, Aoife O Rourke stepped up and split the posts with the winning score. Final score: Tuam-Cortoon 3-5, Ballinasloe 3-4. The Tuam-Cortoon girls were delighted to have seen off a strong challenge by Ballinasloe.

The whole panel played their part in the victory and without each of them the result wouldn’t have been possible. The manager Damien Hesslin and mentor Conal Burke would like to thank all the girls for their dedication all year and all the parents bringing the girls to training & games.

Our weekend competition was sponsored by Leo’s Pharmacy/Palace fields Pharmacy.

Intermediates will play Rahoon Newcastle in the penultimate group game of the Intermediate Hurling Championship in Pearse Stadium on Sunday at 1.30pm.

U13s and U12s have been selected to go to Croke Park on Sunday 30th September 2018 as part of a record attempt for the largest training session.

U15s lost to Gort 5-8 to 1-9 played in Sylane last Thursday. They play Salthill/Knocknacarra tomorrow in Sylane at 6.30pm.

U15s will play Gort tomorrow Thursday at 6.30pm in Sylane.

Lotto Numbers drawn on 3rd November 2018 for jackpot €9,900 were 4,23,24,26. No jackpot winner and no match three winner. Draw takes place in clubhouse every Monday night at 9pm and is open to the public.

Our next 50/50 draw takes place on 24th September. Tickets are available in all the businesses around Dunmore. If you’re not in, you can’t win!

Well done to our under 10 girls who took part in the county Blitz in Clonberne on Saturday morning. The Girls made it to the plate final, but lost out in the final hurdle to Annaghdown. A great day football was had by all.

Well done to Kilkerrin/Clonberne on hosting great Blitz and many thanks to all who came to support the girls.

Our under 14 ladies are through to the Cup semi-final and face Glenamaddy/Williamstown in the semi-final 6.30 on Friday in Glenamaddy.  Good luck to the girls and management in their preparations for this game and please come along to support our girls.

Our under 16 ladies are now in the Shield Semi- final and face Naomh Mhuire.  Please make every effort to attend training, and good luck to the girls and management in their preparations for this upcoming game. Fixture details to follow when available.

Hard luck to our minor girls and management on a narrow defeat in the Shield final last Sunday. Corofin proved too strong running out eventually winners by 2 points. Dunmore MacHales 1-14  Corofin 3- 10.

Our Senior ladies are preparing for their round championship fixture against Corofin on 21st September. Good luck to players and management in their preparations in the run up to the game.

Well done to our eventual winners of Last Man Standing. The jackpot was shared by 4 people Nicola kilgarriff, John Coyle,James Nestor and Damien Redington. Thank you to everybody who entered this fundraising competition for the senior ladies and well done to the winners.

A special word of thanks to Darren Burke for organising and overseeing the running of the competition.

Congratulations to Dunmore Demesne Golf Club on the recent celebrations of the 20th anniversary.

Senior team fixed to play Athenry in Round 4 of SHC in Loughrea on Sunday at 1.30pm. Day is subject to change so look to fixtures again and the club Facebook page for updates.

U15’s had a great win over Pearses last week winning 3-15 to 3-10. Next championship game is in Thursday 13th away to Ardrahan.

Minors were beaten by Annaghadown last week in championship losing by 1-18 to 1-13.

Our minors were defeated by Claregalway on a score line of 0-11 to 1-10 in the Minor Championship North A, Group A played last week in Claregalway.   We play Northern Gaels (Glenamaddy-Glinsk-Williamstown) in Corofin on Saturday evening at 5.00 pm.

We had a big win over Glinsk by 5-14 to 1-6 in the Junior A Championship semi-final played in Barnaderg on Saturday evening.  The Corofin goals were scored by Conor Raftery, Seán Cummins, Alan O’Donovan (2) and Conor Creaven. Well done to all involved on a great display.

We will play Pádraig Pearses in the North Board final. Details have yet to be confirmed.

We lost out to Annaghdown by 1-8 to 0-17 in the Junior C Championship North played in Corofin on Sunday afternoon.   We play our final group game against Mountbellew-Moylough in Mountbellew at 5.30 pm on Sunday.

We play Ballinasloe in the Junior Football Championship in Mountbellew at 3.30 pm on Sunday.

Our seniors will play their final group game against St James’ on the weekend of 22 / 23 September.

Our under 12 team took part in the Templeogue Synge Street tournament on Sunday.  The team was defeated by Ballyboden St Enda’s in the cup semi-final. Hard luck to all the lads involved.

Thanks to Templeogue Synge Street for hosting a great tournament and to our mentors who accompanied the panel of players.‬

Our under 13 panel took part in the Colm Cooper Tournament hosted by Dr Crokes on Saturday.  We defeated St. Pat’s, Donabate by 5-3 to 2-3 in the Plate final. The team was captained by Cian Nolan.

Congratulations to all involved on a great display and sincere thanks to all who helped with the panel of players.