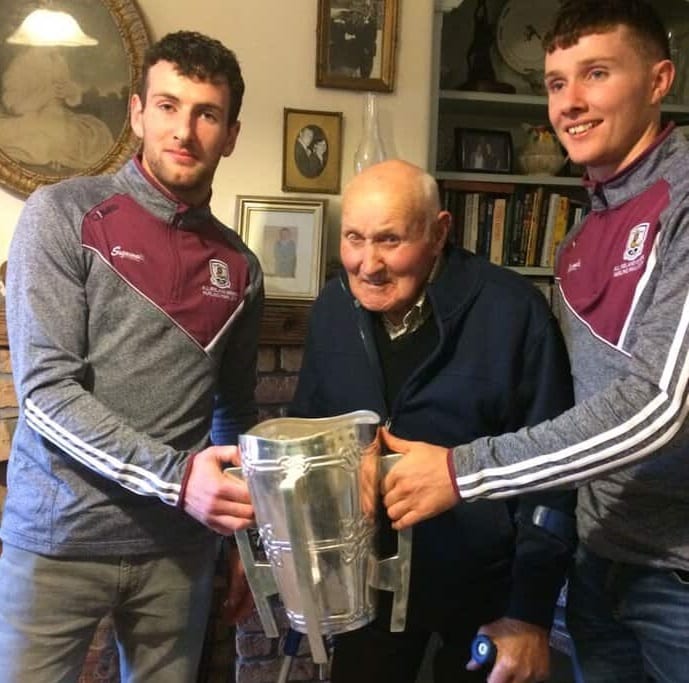 Tributes have been paid to the late Galway football legend Tom ‘Pook’ Dillon who passed away this week.

Tom had been a stalwart of local and county football in Galway for a long time.

He was left cornerback on the Galway team who won the 1956 All-Ireland Senior football final when they beat Cork by 2-13 to 3-7.

The 93 year old passed away peacefully on Tuesday evening at Hillside Nursing Home in Aughrim.

He is survived by his daughters Mary, Patricia, Ann, Deirdre, Clare, and Joan, along with his sister Mary, brother Christy and many grandchildren and great-grandchildren.

In 2017 he got to put his hands on the Liam MacCarthy Cup as well when the Mannion brothers brought to his house after the All Ireland win against Waterford.

At the time of his passing Tom was president of Ahascragh/Fohenagh GAA Club.

Ahascragh/Fohenagh GAA Club said they were very sad to here about the loss of their long time colleague who had given so many years to the club.

Sad to hear of the passing of our Club President, the great Tom "Pook" Dillon RIP, who was corner back on the Galway football team of the 1950s and All Ireland Senior Football Winner with Galway in 1956. He was also greatly involved in our club throughout the years. May he R.I.P pic.twitter.com/OgyuZ2OiGG