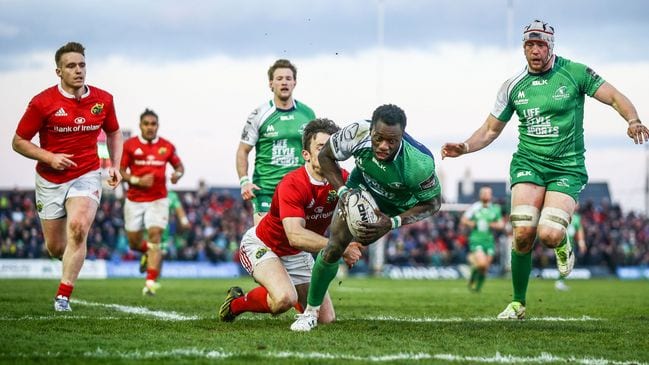 The Western Province beat their southern rivals 20-16 in October after tries for Tieran O’Halloran and a 66th minute score by Tom Farrell.

Irish internationals Ultan Dillane, Kieran Marmion and Bundee Aki are all rested as they manage their game time ahead of the Six Nations in February.

Overall, there are eight changes from the team that lost 21-18 to Leinster on New Year’s Day as Connacht seek a second interprovincial derby win over the festive period against a Munster outfit who’ve suffered two losses.

Eoin Griffin and Pita Ahki from a new centre partnership for Aki and Tom Farrell in the backs; Niyi Adeolokun returns to the wing instead of the injured Cian Kelleher; and Caolin Blade comes in at scrum half for Marmion.

“We have come through a series of big games and some guys have seen a lot of game time,” said Keane on Connacht Rugby’s official website.  “Our internationals in particular are due a break especially with the Six Nations just around the corner. The squad is in a really good place at the moment.

“Obviously, we felt we could and should have won against Leinster and we came very close. We did the review during the week, we identified where we came up short and now we move on.

“Munster will be hurting after their two games over the Christmas period and at home they will be a massive challenge. They have quality all over the park and I’m sure they will be really determined to get back to winning ways before they get back to European competition”.

Munster have also made numerous changes as they try turn their fortunes around with Head Coach making 10 changes from the side that conceded a 17-point lead in their 24-17 reversal against Ulster.

Irish international CJ Stander captains the side with Chris Farrell, Rhys Marshall and Conor Oliver all returning from injury.

Andrew Conway and Keith Earls start on the wings replacing Calvin Nash and Alex Wooton.  Earls started at centre against Ulster with the suspended Sam Arnold, and Rory Scannell and Farrell will form a new centre partnership.

Ian Keatley and Conor Murray form a formidable half back partnership with JJ Hanrahan and Duncan Williams making way.

John Ryan holds his position at tight head joined by Dave Kilcoyne and Marshall in the front row for James Cronin and Niall Scannell; Jean Kleyn comes into the second row for the injured Billy Holland; while Oliver and Stander take their places in the back row for Tommy O’Donnell and Chris Cloete.

Kieran Keane has announced his starting XV to take on Munster in Thomond Park on Saturday (Kick Of 7:45pm – Live on TG4). #MUNvCON
➡️ https://t.co/G4kJefKMPl pic.twitter.com/wv2uM6ntiH

Both teams are in Conference A with Munster sitting securely in second place on 38 points behind Glasgow Warriors.  Connacht are in fifth place, level on 24 points with Cardiff Blues in the race for Champions Cup qualification.  Kick-off in Thomond Park on Saturday is at 7.45pm.