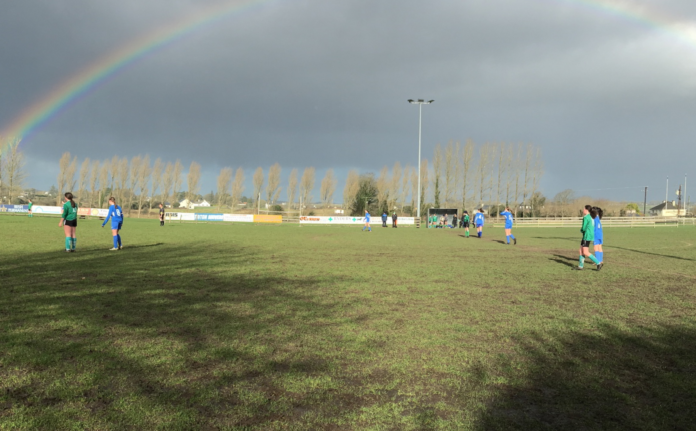 Moyne Villa FC had a strong weekend for their U15 and U16 teams, with impressive results against Colemanstown and Kinvara.

After a night of torrential rain and early pitch inspection, the game was given the thumbs up to go ahead.

An early own goal by Colemanstown gave a boost to Moyne Villa, after which Ava Bohan manged to hit a shot  through the hands of the keeper.

She scored her second goal of the match about ten minutes later after coolly finishing a through ball at the far post.

Just before the break Emma Curran played a nice pass into the box, allowing Ava Heneghan to put the scorecard to 4-0 at half-time.

In the Second half Eda Hyland showed some great skills with ball in attack and got herself on the score sheet.

Colemanstown rallied and managed to make it 5-1, before Aisha O’Malley put away goals 6 and 7 by full time.

Villa played with the gale in the first half and this proved crucial. After sustained early pressure, Matthew Cahill released Padraic Heneghan and he coolly finished.

After a foul on the edge of the box, Cian Earnor fired home a fine strike into the top corner.

Straight from the kick off Villa won possession through Muiris Flaherty, and Sandi Tshabalaba played Conor McNally through and he finished at the second time of asking.

Right on the stroke of half time Villa added a fourth when Conor turned home an Eoin Mannion corner.

Just after half time Conor McNally completed his hat trickafter a good through ball. Kinvara struck back with a fine strike of their own from a free kick, putting heavy pressure on Villa.

In the end, Mathew Cahill added a sixth goal for Villa after his hard work.

However, things didn’t go as well for the U15 A team who faced Salthill Devon on Saturday afternoon, losing 3-0 after failing to hit their stride.