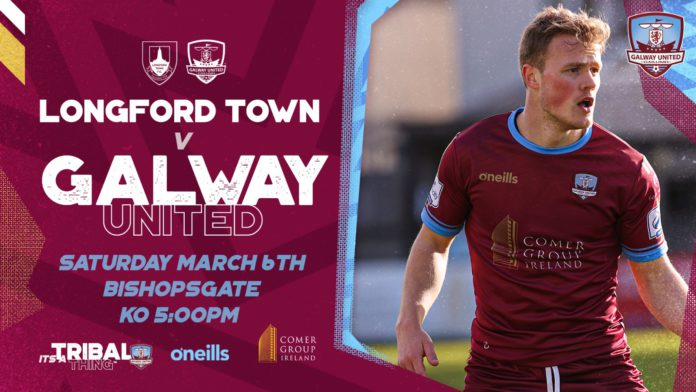 This evening’s friendly against Longford will be an important chance to give more of the Tribesmen a chance to play before the new season Galway United manager John Caulfield has said.

United are headed to Longford Town today for their third pre-season friendly, with kick-off at 5pm.

This will be the first time the two teams face each other since last November’s First Division play-off final defeat.

Daire Doyle’s side ultimately earned promotion to the Premier Division after defeating Shelbourne in the promotion/relegation decider.

The Tribesmen have produced two positive performances against Premier Division opposition in pre-season so far, a victory against Finn Harps and a respectable mid-week draw against Sligo Rovers.

Galway United manager John Caulfield is looking forward to yet another test for his side at Bishopsgate.

“This game gives us another opportunity to mix up the team again,” John Caulfield said, explaining that a lot of players didn’t get a chance to take the field against Sligo on Wednesday, so this will give them a chance to show what they can do.

“The Sligo game during the week was a good test for us. We have done a lot of work on the training ground so far but there is still a lot of work to do. The Longford game will be another challenge for us again.”

“Ronan Manning, Killian Brouder, Mikie Rowe and Shane Duggan won’t be involved tomorrow due to small knocks. Other than that, everyone else will get a run-out.”

Galway United v Longford kicks off at 5pm. The match will be live streamed for free on Longford Town’s Facebook and YouTube channel.