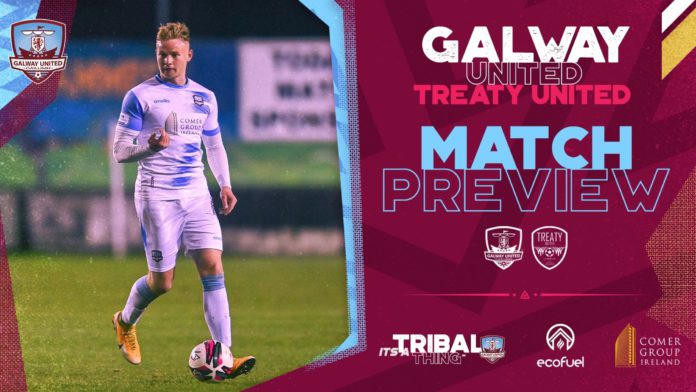 Galway United are expecting a fierce challenge when they host Treaty United from Limerick at Eamonn Deacy Park on Friday.

Tomorrow night’s match will be United’s second home game of the season after last Friday’s fixture against Cabinteely was called off.

Treaty are currently sitting at the middle of the Division 1 table with one win and two draws under their belt.

Galway United are a bit behind in terms of games played thanks to last week’s cancellation, and are still at one loss and one draw.

United manager John Caulfield knows it will be yet another tough game against an unbeaten Treaty United squad, but he is keen for his team to put in a “good performance”.

“Treaty United have made a very impressive start to the season so it should be a really interesting match,” Caulfield told the club’s media team.

“You have so many connections between the two clubs: we have Killian Brouder and Shane Duggan, who are from Limerick, while Marc Ludden and Jack Lynch were part of our squad last year that had such a great run in the playoffs.”

“The majority of Tommy Barrett’s squad are from that Limerick/Clare area so he has a good local element. You can see that in their early performances, that there is plenty of physicality, plenty of energy, and plenty of enthusiasm; a lot of skill too.”

“We are under no illusions about the game; we have seen how good they are, but at the same time it is up to us to make sure we put in a good performance.”

“Last week’s postponement was frustrating. It happened, we got back into training on Saturday and now all of our focus is on Treaty. Ultimately, it is about making sure that we give a good display against them on Friday night.”