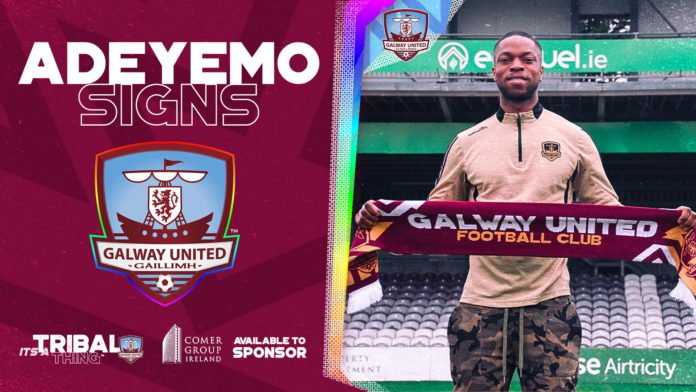 The impressive young striker Jordan Adeyemo has been announced as the latest addition to the Galway United squad for the coming season.

The 21 year old is making the move west after an impressive scoring run with Drogheda United.

Speaking with Galway United’s media team at Eamonn Deacy Park last week, he said that joining Galway is a “big opportunity” that he felt he had to take.

Moving into full-time football was also something that he said he has always wanted to do.

Adeyemo came up through the academies of both Shelbourne and Drogheda United, and showcased his potential as a striker with the U19 Drogheda side in 2019, scoring 18 goals in the league that year.

This brought him up to the main team, where he appeared 20 times in the 2021 Premiere Division season, with five goal contributions.

Moving to Galway also means stepping down to the First Division, but Adeyemo said that he thinks United have a good shot at correcting that.

“From looking at it, I think that Galway are a big club and obviously they finished second last year, just cut short through the playoff game against Bray. So they were unlucky not to get promoted.”

“This season I think it’s a great opportunity for them to do well and possibly get themselves back up to the Premier Division.”

But he said that he’ll be focused on just doing his job with the team, which is helping to score goals first and foremost.