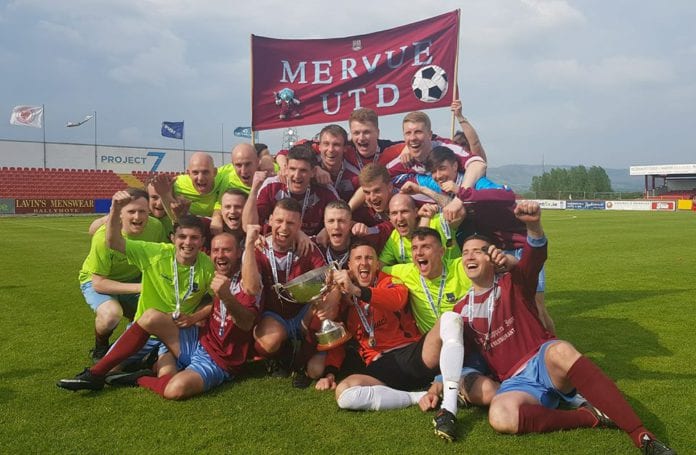 Mervue United are Connacht Junior Champions after they came through a penalty shoot-out on Sunday (27th May) in Sligo’s Showgrounds.

It was an excellent display of penalty shooting that followed a 120-minute stalemate after Mervue made the perfect start.

Enda Curran was on the end of a cross from the left for the Galway outfit to score after just three minutes.

Cross from the left headed home by @EndaCurran1 great start after just 3 minutes, and Curran shoots just past the post a minute later

It was a lead Mervue held for most of the first half.  Curran came close on another couple of occasions while Finan and Mark McGoldrick nearly opened Carbury’s account.

But the Sligo team were on par before the break.  A corner was Steve Feeney perfectly placed for the touch and the sides were level at 1-1 at half-time.

And they remained deadlocked until the finish.  Mervue hit the crossbar in normal time and Barry Moran came close.  But Carbury were disappointed not to seal the victory as Barry O’Mahoney and Aaron Murrin had chances and Finan was denied by a Colm Power save on 104 minutes.

Power was sacrificed before the extra time concluded to allow Healy his opportunity.  But Mervue’s supporters were kept waiting for victory as the first 10 strikers found the target leaving it 5-5.

Captain Aaron Finnerty converted the sixth but Daniel Smith kept this provincial final on a knife edge.  Substitute Paul Healy made it 7-6 but Gary Finan was expected to keep the contest alive.  However, Peter Healy made the block and Mervue United were crowned Connacht Junior Cup Champions!